Apparatus could help observatory one day “find another Earth” – Toptica. 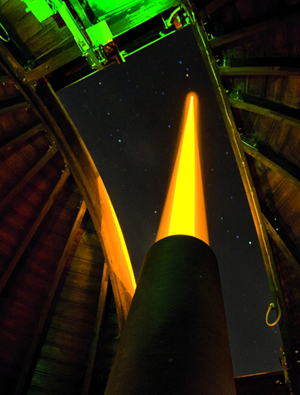 A novel approach to laser guide star technology will be demonstrated at the forthcoming SPIE Astronomical Telescopes + Instrumentation conference in Amsterdam (1-4 July 2012). Laser guide stars are small bright spots in the sky projected for applications in astronomical applications. They are artificially generated by laser beams that are modified by adaptive optics.

The new laser guide star system was jointly developed by Toptica and Canadian company MPB Communications and it is based on the approach pursued by the laser group of the European Southern Observatory (ESO).

A preproduction unit has successfully undergone extensive qualification testing - including performance, lifetime, climate chamber: high and low temperature, altitude, EMC, transport climate, shock and vibration - to prove that it can cope with the harsh environmental conditions at its ultimate destination at Cerro Paranal, Chile.

Four of the SodiumStar lasers will be installed in 2013 as part of the adaptive optics system of ESO’s VLT. They are also considered as pathfinder installations for ESO’s E-ELT (European Extremely Large Telescope) currently at the planning stage. The joint development of the SodiumStar 20/2 has combined Toptica’s experience in narrow-band tunable diode lasers, frequency stabilization and frequency doubling with that of MPBC in high-power fiber lasers and Raman amplification.

At the core of the SodiumStar 20/2 is a narrow-band Raman fiber amplifier (EFRA) based on the EFRA technology already pioneered and patented by ESO. The EFRA amplifies the spectrally-narrow and tunable diode laser seed at 1178 nm to approximately 35 W of optical power. Efficient frequency conversion yields more than 20 W of output power at the sodium resonance (589 nm) with a linewidth of less than 5 MHz.

The SodiumStar 20/2 overcomes previous approaches that were, to say the least, difficult to operate in an observatory environment (cooling, gravity-invariant operation, surface temperature, altitude). The SodiumStar does not require a clean room and can be installed directly on the telescope. It features an integrated D2b sideband generation (repumper), increasing the return flux dramatically compared to existing pulsed guide star laser solutions.

The technology also allows a new technique coined “remote pumping” in which the bulky and high energy consuming component of the laser can be separated up to 30 m from the lightweight (80 kg) laser head situated on the guide star launch telescope assembly. 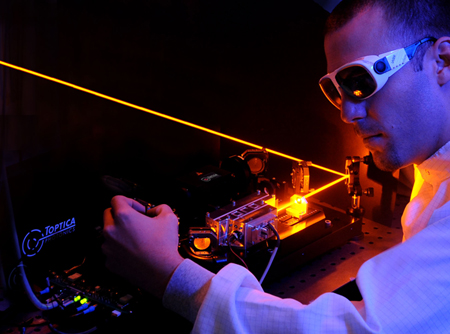 The laser system is designed to resonantly excite the sodium atoms in the Earth’s mesosphere at an altitude of 90 km. The laser system will act as a beacon enabling the adaptive optics to correct for wavefront distortions induced by turbulence in the Earth’s atmosphere. In 2013, four of these robust, compact, turn-key laser systems, with active wavelength stabilization will be installed on the existing telescope structure of the VLT.

These SodiumStars sources will serve as the backbone of the VLT Adaptive Optics Facility for many years to come. “We are very proud that we can support the astronomical community with our laser development and commitment, possibly finding another Earth one day,” said Wilhelm Kaenders, Toptica’s President.

”Together with MPBC, we met the challenge presented by ESO in 2009 to provide an appropriate laser source. In a short period of time we developed key technologies to overcome the laser challenge faced by ESO for more than 20 years.”

Apart from ESO, many other national and international observatories plan to equip their telescopes with state-of-the-art laser technology. Toptica adds that it is looking forward to playing a major role in this work in the coming few years. The company is exhibiting at the SPIE Astronomical Telescopes + Instrumentation event on booth 121.