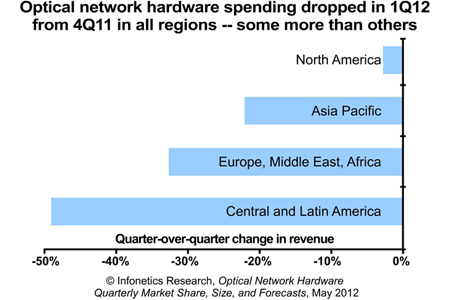 Spending on optical networking equipment fell 23% globally in the first quarter of 2012 (1Q12) compared with the previous quarter, according to market research firm Infonetics Research, Boston, Ma, US. The company published its gloomy analysis this week in its Optical Network Hardware vendor market share report.

Andrew Schmitt, principal analyst for optical networks at Infonetics Research commented, “While optical hardware revenue trends in all world regions were not positive in the first quarter of 2012, the most alarming development is that year-on-year in EMEA – particularly Europe – spending on WDM optical equipment decreased faster than spending on legacy SDH equipment.”

"This is not the behavior of a region experiencing only a minor quarterly pullback. By contrast, the trend in North America was the opposite, with carriers cutting spending year-on-year but allocating [investment] towards forward-looking technology investments like WDM equipment and ROADMs.” 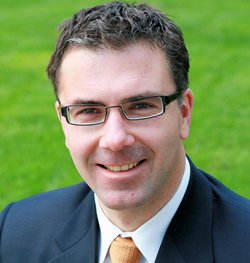 Schmitt adds: “EMEA and North America are both now trending downward on a rolling fourth-quarter basis, and Asia Pacific is flat. Still, conversations with vendors and carriers leads Infonetics to believe that spending in North America will resume moderate growth and we are forecasting solid gains in optical spending in China this year in large part due to our recent visits with Chinese carriers. But Europe is a tough call, with macroeconomic trends there not providing much hope and evidence that some service providers there are battening down the hatches.”

While the global WDM and SONET/SDH optical network equipment market declined 23% in 1Q12 to $2.8 billion (the largest quarterly drop in many years), the impact was sharpened by a strong previous quarter, when the market grew 9%. Revenue for all optical vendors declined in EMEA, with the exception of Infinera, Adva and Transmode. Though EMEA typically has a seasonal sequential decline in the first quarter, 1Q12 was the worst quarter for optical capital expenditure in more than five years.

Other notable observations by Infonetics included:

2. Asia-Pacific sales were buoyed by strong spending in Japan, with NEC and Fujitsu posting what Infonetics referred to as “eye-popping” 28% gains in 1Q12 from the previous year’s first quarter.

3. Aside from the standout performances by NEC and Fujitsu, while many of the big vendors enjoyed gains the previous quarter, 1Q12 was characterized by smaller companies such as Infinera, Adva, and Transmode outperforming the market. 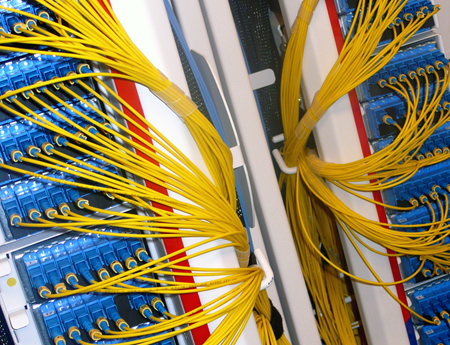 Not a total mess: smaller players outperformed the market.

4. ROADM optical equipment spending was flat in 1Q12, but Infonetics considered this to be “an achievement – considering this category posted a record quarter in 4Q11”.