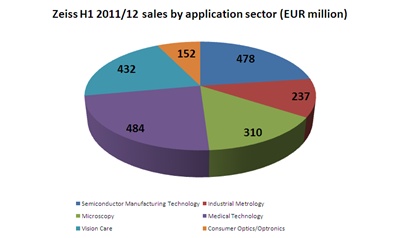 The Carl Zeiss Group is on course for another strong financial year, despite the negative impact of the current slump in the semiconductor market.

At €2.1 billion, sales for the first six months of fiscal 2011/2012 – ending March 31 - were down only 2% on the equivalent period one year ago, when overall spending on semiconductor equipment, where the company supplies products like photomask metrology and optics for lithography systems, was much higher.

During its boom periods, the semiconductor sector is the largest single market for the Germany-headquartered company’s products. In the latest results, semiconductor group sales fell 25% year-on-year to €478 million. Despite that slump, Zeiss has increased the division's workforce by 9% over the same period to 2,360 – likely to meet the challenge of developing products for the emerging era of extreme ultraviolet (EUV) lithography.

The semiconductor decline meant that medical systems became the biggest single sector for the company by sales, with revenues of €484 million in the period. As reported by its medical and life sciences affiliate company Carl Zeiss Meditec (of which 75% is owned by the Carl Zeiss Group) last week, this sector is growing quickly, with sales up 17% year-on-year.

But it was in the field of industrial metrology where Zeiss reported the strongest growth, with sales climbing 29% to €237 million. 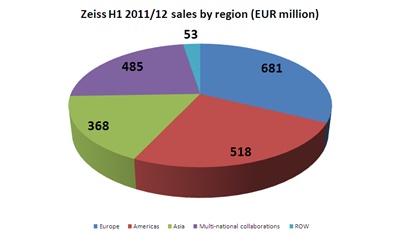 “Through our broad diversification, we were largely able to compensate for the cyclical downturn in the Semiconductor Manufacturing Technology (SMT) group. This underscores the strength of our portfolio.”

While Zeiss has been able to keep its top line largely intact, the overall profitability of the business has been hit by the semiconductor downturn. Earnings before interest and tax (EBIT) slumped by 34% to €232 million, down from €355 million a year ago.

That is partly because the company is maintaining a high level of spending on research and development activity, mindful of the fact that very nearly half of Zeiss’ sales arise from products that have been launched within the past three years. In the latest period, R&D spending was up 10% year-on-year to €190 million.

Infrastructure investment
Zeiss is also spending heavily to update and modernize its vast global infrastructure, and invested €108 million in plant and equipment in the latest period. Over the next few years, the company plans to invest €500 million in a further expansion of its sites in Germany alone.

Buoyed by the strong performance in emerging economies and Asia in particular, Kaschke is optimistic for the remainder of the current fiscal year - despite the ongoing sovereign debt problems in Europe.

“We are aiming for revenue of around €4 billion,” he said, with expectations of a “slight” recovery in the semiconductor market. That total would represent a marginal decrease on the previous year, when sales reached a record-breaking €4.24 billion – but could be regarded as a strong performance in the context of the semiconductor slump.

The company continues to expand in terms of employees, with its global workforce now closing in on 25,000 workers.

• Last week, Zeiss released a new dual-laser version of its LSM 7 series of multiphoton microscopy systems. The different laser wavelengths can simultaneously excite several fluorescent dyes or proteins, or image specimens with one wavelength and manipulate them in multiphoton mode with another.

According to Zeiss, the automatic free beam adjustment gives the system a high degree of stability and reproducibility and ensures exact overlay of the two excitation beams. Typical applications of the system, which is also compatible with optical parametric oscillators, could include studies of small-animal brain activity.