Key metric indicating demand levels in the market for semiconductor manufacturing equipment above parity for first time in 18 months. 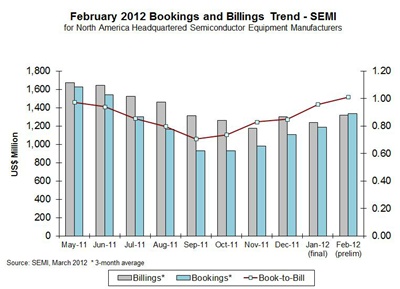 North American manufacturers of semiconductor equipment are registering a steady increase in bookings, perhaps indicating the early signs of a market recovery in a key sector for photonics technologies.

For the first time in 18 months, the important book-to-bill metric measured by the Semiconductor Equipment and Materials International (SEMI) industry group has crept above unity – indicating that more orders are being received than are currently shipping.

Preliminary figures for February, based on a three-month rolling average, showed bookings of $1.33 billion and billings of $1.32 billion, equivalent to a book-to-bill of 1.01. SEMI’s president and CEO Denny McGuirk welcomed the finding, and said in a statement:

“For the first time since September 2010, the book-to-bill is above parity as three-month average bookings continued to increase. Investments in advanced process technologies for NAND Flash, microprocessor and foundry are key spending drivers for the year.”

Speculation
The market for semiconductor equipment has been in a decline since the middle of 2011 – as had been expected after the sector enjoyed an unprecedented boom period following the recovery from the global economic crisis of late 2008 and early 2009.

Speculation about the timing of a renewed upswing in demand has grown in recent weeks, with key OEM companies such as Applied Materials and KLA-Tencor indicating regained momentum at the start of 2012, in particular from foundry customers and the mobile handset sector.

Those integrators purchase large volumes of photonics-based products, particularly lasers, for OEM tools used in wafer chip production, quality control and test and measurement, and are key customers to some of the optics industry’s major players including Newport, Coherent and Cymer.

And this year could see even greater demand for lasers in the semiconductor equipment market, with the emergence of the first extreme ultraviolet (EUV) lithography systems for high-volume manufacturing.

EUV sources under development at two of the three potential suppliers of light sources to the lithography system giant ASML use high-power lasers fired at droplets of tin to generate the plasma that emits the EUV light (as part of a broadband emission). If the laser-driven sources meet the power and reliability targets set by ASML then major CO2 laser vendors such as Germany’s Trumpf will be in line for a significant boost to their business, because each EUV source will require some 20-30 kW of laser power to provide the required intensity of EUV output.

Overall, semiconductor equipment bookings remained down nearly 17% on a year-on-year basis, reflecting the stronger level of demand still apparent one year ago. But with the book-to-bill ratio climbing from just 0.71 in September 2011, at which point bookings for North American suppliers were measured at only $0.93 billion, those in the photonics industry with exposure to the semiconductor market should be more confident of improved prospects as 2012 unfolds.