Leading photovoltaics industry analyst reports market growth of 40% after a surge in demand to beat deep incentive cuts in late 2011. 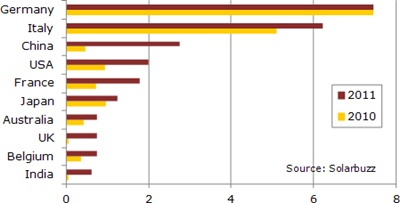 The surge in demand for photovoltaic (PV) installations in the closing few months of 2011 propelled the market to a record high of 27.4 GW for the year - representing 40% growth on the 2010 level of around 19 GW.

Analysts at NPD Solarbuzz, which has just published its influential “Marketbuzz” annual PV market report, said that the impending deep cuts to incentives for solar-generated electricity had combined with sustained price declines throughout the industry’s supply chain to deliver the strong growth rate. The value of the total PV market also grew, but only by 12%, to reach $93 billion.

And although prices continue to decline, this year could see a sudden end to the rapid growth witnessed over much of the past decade:

“Aggressive cuts in incentives in Germany and other European countries have set up the potential for a global market decline in 2012,” said Solarbuzz president Craig Stevens, although he also pointed out that there will now be a race to install in Germany ahead of severe cuts by the country’s government as it seeks to restrict the German PV market to annual installations in the range of 3.5 GW.

The cuts could signal a major shift in the dynamic of the PV market, Stevens added: “These cuts in tariffs will force companies to embrace self-sustaining marketing models earlier than they expected,” he said.

Over-production followed by market surge
A period of over-production in the first half of 2011 was largely responsible for triggering dramatic falls in the prices of PV products last year. According to Solarbuzz’s figures, the average factory-gate price of a crystalline silicon PV module in the closing quarter of 2011 was 46% lower than a year earlier.

The end-of-year surge in demand has helped to restore some semblance of balance in the supply chain, and at 29.5 GW last year’s global cell production was only 2 GW in excess of the eventual level of PV installations.

But prices will continue declining rapidly in the near term, before perhaps steadying later this year. “Average c-Si factory-gate prices in 2012 will be at least 29% lower than the 2011 average,” states the Solarbuzz report, but over the next five years, Solarbuzz analysts expect a decline of around 50% in total.

Although the late surge ensured that Germany retained its position as the largest single market for PV, with some 7.5 GW of installations, and that Europe accounted for 68% of world demand last year, the Solarbuzz figures clearly show a changing geographical picture.

European countries had accounted for 82% of the market demand in 2010, but last year saw installations grow dramatically in the twin economic superpowers of China and the US. China rose from seventh place in the 2010 list to third place overall in 2011, after installations in the country quintupled to nearly 3 GW. In the US, installations doubled to 2 GW – as had been widely predicted – after a number of large-scale and utility projects were completed.

Tariff reviews
Also moving up the rankings rapidly was the UK market. Almost non-existent until last year, a generous feed-in tariff and falling prices sparked installations of close to 1 GW, ranking the UK eighth in terms of global demand, and almost immediately prompted a government review of the tariff.

This year, Solarbuzz expects the European share of the market to slip to 53% as China and the US, along with other Asian markets, expand rapidly. The cuts to supporting tariffs across Europe will also mean that China needs to re-evaluate its own policies. The country has said that it wants to install 50 GW of PV by the end of the decade, but Stevens noted that this may not be enough to sustain its producers, who now dominate the market:

“Chinese policy makers will face a decision whether to stimulate their domestic market even more than planned, to support their globally dominant manufacturing base,” he said. The Solarbuzz analysis suggests that firms in China and Taiwan combined accounted for 74% of global cell production in 2011, up from 63% the previous year and indicating the grip on the c-Si market held by the leading module producers Suntech Power, Yingli and Trina Solar.

“Production cuts required”
One of the major reasons why prices have been forced down so rapidly has been the massive increase in availability of polysilicon feedstock over the past three years. As recently as 2009, a constrained supply meant that this step of the manufacturing process was keeping cell and module prices high, but as Stevens pointed out, this has completely changed:

With this continued overcapacity in the supply chain, and expectations of a market decline in 2012, Stevens concluded with a warning: “Cutbacks in polysilicon, wafer and cell production plans before mid-year will be required to avoid further damaging margin declines.”

If there is a decline this year, it will be a first for the industry. According to historical figures from the European Photovoltaics Industry Association (EPIA), the market has enjoyed year-on-year growth since 2000, although 2003 and 2006 were relatively flat years.

The latest Marketbuzz report from NPD Solarbuzz, with forecast analysis and data covering the period 2012 to 2016 is available now via the analyst’s web site.