Jenoptik to pay dividend after record 2011

After a year characterized by strong orders and debt restructuring, the German company is in expansion mode. 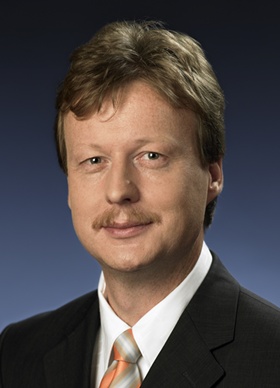 Jenoptik, the optics and laser firm based in eastern Germany, is to restore its shareholder dividend after confirming a much-improved financial performance in 2011 that included record-breaking earnings from its laser and optical systems business unit.

Reporting a group operating profit of €49.2 million for the fiscal year – up 70% on the 2010 figure – Jenoptik’s chairman Michael Mertin and CFO Frank Einhellinger said that they would propose a dividend of €0.15 per share at the company’s annual general meeting, which will take place in Weimar in June.

“As promised we have restored Jenoptik’s ability to pay a dividend,” said Mertin. “With the payment we prove that Jenoptik has become a company which combines growth and financial stability.”

The financial stability has resulted in large part from a major restructuring of debt overseen by CFO Einhellinger. That resulted in a €90 million debenture agreement signed in October 2011, which was used to repay existing loans that had been backed by a federal guarantee.

“This was particularly important for us,” said Einhellinger. “We would like to express our thanks for the confidence which the politicians have shown in our development.”

That confidence certainly appeared well-placed in 2011, as Jenoptik’s revenues grew more than 13% to reach €543 million – slightly higher than the figure predicted by the company in its preliminary results in February.

Laser division grows strongly
Of Jenoptik’s three business divisions, it was the laser and optical systems segment that provided the largest single chunk of that revenue, as sales rose nearly 15% year-on-year to reach €217.1 million.

Jenoptik attributed the robust growth to stronger sales of semiconductor lasers and demand from the medical sector, as well as market pull for laser processing systems used in the automotive industry and the manufacture of thin-film photovoltaics.

The laser and optical systems division posted a record EBIT (earnings before interest and taxes) of €29.2 million for 2011 – more than double the 2010 figure, thanks in large part to the strength of the semiconductor industry in the first half of last year.

That strength has dissipated in the past couple of quarters, however, and this has affected order intake. At €244.4 million for the full year, this was down slightly on the 2010 figure.

CEO Mertin expects more sedate sales growth in 2012, and reiterated the “cautiously optimistic” tone set earlier this year. “We are seeing a stable order intake,” he said. “The year has got off to a good start and we expect a successful first quarter.” Overall, Mertin says that group sales should grow by between 2% and 6% this year – depending on the speed of recovery that is witnessed in the semiconductor industry. 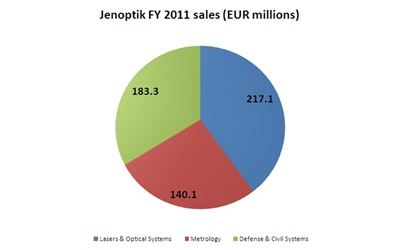 At the moment, the signs look positive. The key “book-to-bill” ratio, calculated each month by the Semiconductor Equipment and Materials International (SEMI) industry group, pushed above unity in February, for the first time in 18 months.

Jenoptik, which will be boosted next year by a significant reduction in interest payments thanks to the recent debt restructuring, is now expanding on several fronts. The company is currently building a new facility to more than double its production of laser diodes in Berlin, and has established a new US subsidiary focused on defense and security applications, including infrared camera modules and laser range finder equipment.

According to Jenoptik, the novel designs developed under a team led by Götz Erbert at FBH have now resulted in single-diode chips with reduced energy loss but without any impact on beam quality. The new diode lasers from the FBH are said to achieve an efficiency of 63% at an output power of 12 W, with scale-up to 15-20 W thought possible. That should help greatly as Jenoptik seeks to further develop its nascent fiber laser product offering.