Polytechnique Montreal finds that transfection of cancer cells with a femtosecond laser is improved by gold nanoparticles. 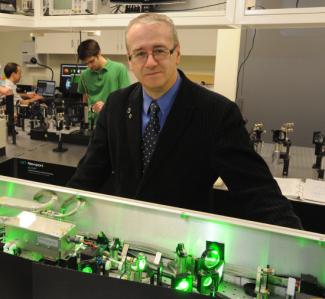 Transfection, the process of deliberately transferring foreign genetic material into cells, is a significant technique in cancer studies, but none of the current techniques for making it happen are entirely satisfactory.

Now a team at Polytechnique Montreal led by Michel Meunier has studied a method involving femtosecond-laser irradiation of gold nanoparticles dispersed on the cells, and found that it greatly enhances the transfection efficiency without increasing the risk of toxicity or unacceptable cell damage.

Previous techniques using a tightly focused infra-red femtosecond source on its own to perforate cell membranes and enhance the transfection efficiency have been tried in the past, and found to suffer from throughput rates well below those needed for effective biological studies.

Equally, irradiating gold nanoparticles with relatively long-pulse nanosecond lasers has been shown to produce permanent holes in surfaces, including cell membranes, through laser resonance and extreme heating of the particles. But in biological cells, toxicity is then a major risk.

The Montreal team is the first to adapt this approach into one suitable for use in transfection with cancer cells, and discovered along the way that the efficiency of the process could be significantly improved.

"In our project, the action of a femtosecond laser on gold nanoparticles deposited on the cell membrane produces a nanobubble in that membrane," said Meunier. "This bubble, approximately 400 to 600 nm in size, allows entry of the foreign DNA, before healing after a certain time has passed."

The experimental set-up at Polytechnique Montreal can treat an area of 40 mm2 per minute, considerably faster than earlier experiments along similar lines. The process employs a 800 nm source, operating at a repetition rate of 1 kHz and maximum pulse energy of 5 mJ. The gold nanoparticles were 100 nm diameter.

Assessing the efficacy of the process was done by measuring the percentage of human melanoma cells in a which a green fluorescent protein became successfully incorporated. The team found that the perforation rate using their process was an impressive 70 percent. "This is three times more effective than lipofection, a standard technique in which liposomes are used to carry genetic material across the cell membrane and into a cell," Meunier commented. 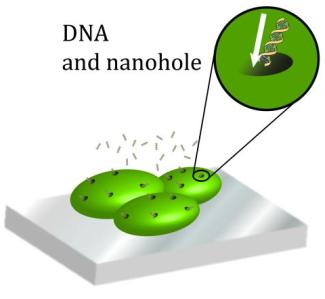 Low toxicity
The key to success seems to be the creation of the transient localized cavitation bubble near the cell membrane, induced not by direct heating action of the laser on the nanoparticle, but rather through an off-resonance and plasmonic-enhanced interaction.

Meunier believes that the mechanism involves the nanoparticles amplifying the scattered near field around a particle's surface and inducing a highly localized electronic plasma, which rapidly relaxes and leads to the formation of the bubble.

This off-resonance laser excitation scenario reduces the energy absorbed by the nanoparticle itself, and so inhibits the break-up of the particles into even smaller fragments during the irradiation.

Since it's these small fragments that would pose the worst risk to the health of the cells, avoiding their creation helps the Montreal technique to demonstrate the very low toxicity rates that are needed if the technique is to become suitable for in vivo applications.

The potential spacial selectivity of the the process could be another advantage, since only those cells covered with nanoparticles are affected by the irradiation, even in mixed cultures of tissues.

"The femtosecond laser source is critical," said Meunier. "Without it, this process does not work, and we know that the wavelength and fluence of the laser, along with the size and concentration of the nanoparticles, are all vital. The next steps are to get a better understanding of the effect of these various parameters, while also investigating the application of this process to many types of cells and various types of illness."