Pocket-size microscope accessory accurate to 0.01mm - on sale from March 2012. 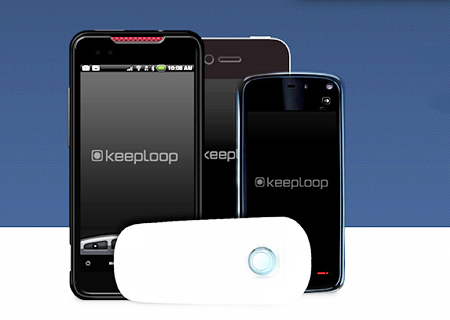 The VTT Technical Research Centre, based in Espoo, Finland, has developed an optical accessory that turns an ordinary camera phone into a high-resolution microscope accurate to one hundredth of a millimetre. The device is officially released for sale on 5 March 2012.

Among groups expected to benefit from the device are the printing industry, the security business, health care professionals and private consumers interested in economical microscopy. A new Finnish enterprise called KeepLoop Oy and VTT are already exploring the commercial potential of the invention. The first industrial applications and consumer models will be released in early 2012.

The operation of the device is based on images produced by the combined effect of an LED light and an optical lens. Various surfaces and structures can be examined in microscopic detail and the phone’s camera used to take sharp, high-resolution images that can be forwarded as MMS messages.

A conventional mobile phone is converted into a microscope by the attachment of a thin, magnetic microscope module in front of the camera’s normal lens. The device fits easily in the user’s pocket, unlike conventional tubular microscopes.

Janne Suhonen, key account manager at VTT, who has been responsible for commercializing the phone-microscope development, told optics.org: “We started to develop this in 2005 and VTT continues to develop modules for low-cost applications based on optical modules, mobile technologies and wireless networking. There is also great potential in 3D and colour measurement applications.” 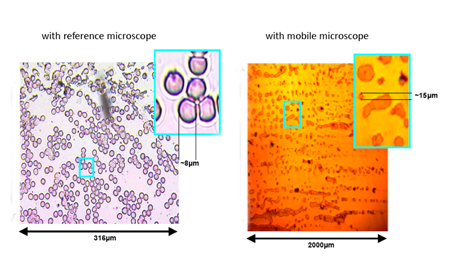 “Particular applications of the new mobile phone-based microscope could be in healthcare in the developing world or in education anywhere as a low cost, easy to use microscope. It should also appeal to hobbyists.”

The plastic macro lens of the mobile phone microscope magnifies objects effectively; the camera’s effective field of view is 2x3mm. A number of LEDs are sunk into the outer edge of the lens, allowing objects to be illuminated from different angles. Images illuminated from several different angles could be used to produce 3D topographic maps, for example, with mobile phone software.

The 3D maps so produced are accurate to 0.01mm.  Suhonen added that “the competitive edge of the product is based on next-generation lens technology, the compact and user-friendly structure, and customisable extra features”.

The mobile phone microscope can also be used to study surface formations, especially in the printing industry as part of quality control and in field conditions. In the security business the device could be used, for example, to read microcode in various logistics systems, while it is also suited for studying security markings, and for authenticating products as genuine as part of brand protection. The microscope is capable of detecting hidden symbols in products that are not visible to the naked eye.

The device can also be applied to study of the environment. Consumers could use the instant microscope when out and about to examine the leaves of trees and plants, for example, or study insects. Another potential application is in examining textile structures such as strands of hair, or the fibrous structure of paper.

The device also has uses in social media, and in community-based hybrid media where traditional forms of media are used in combination with each other. There are also several potential applications in the gaming world.

KeepLoop Oy is a new innovative company based in Tampere, Finland. The company develops optoelectronic accessories for mobile telephones around the world. The company’s target groups are both the industrial sector and consumers. By working together, VTT Technical Research Centre of Finland and KeepLoop have been able to produce a package that combines the scientific study of technology and commercial potential.

With its wide knowledge base, VTT can combine different technologies, create new innovations and a significant range of world-class technologies and applied research services developed for improving its clients' competitiveness and competence.

Through its international scientific and technology network, VTT (established in 1942) can produce information, upgrade technology knowledge, create business intelligence and value added to its stakeholders. VTT, which is a not-for-profit organization, is a part of the Finnish innovation system under the nation’s Government Ministry of Employment and the Economy. VTT Group’s turnover in 2010 was € 292 million, and its headcount 3,167