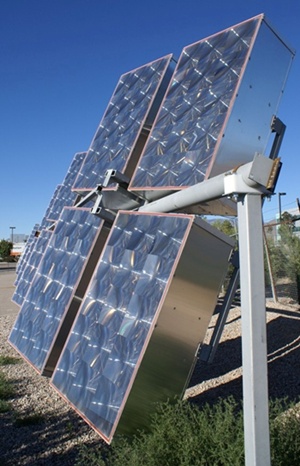 Emcore, the US company that produces both high-efficiency solar cells and optoelectronic components for optical communications, says that its “Suncore Photovoltaics” joint venture in China has begun manufacturing concentrating photovoltaics (CPV) modules.

Along with partner San’an Optoelectronics, Emcore held an opening ceremony on February 21 to commemorate the start of CPV module production at the facility in Huainan, China – just a year after ground was broken on the construction of the site.

With the first of three phases of the construction now completed, Emcore says that the joint venture has an annual production capacity of some 200 MW CPV modules, which produce electricity by focusing sunlight onto a multi-junction solar cell.

That is not too dissimilar to the entire global market for CPV modules right now, but Suncore already has a major local project to supply – in the form of a 50 MW purchase order for a utility-scale CPV farm in Golmud, one of the sunniest places in China. That climate is crucial, because CPV only works effectively in locations with high levels of sunshine and clear skies.

Emcore’s COO Christopher Larocca described this purchase order as “testament to the demand for CPV in China”, adding that the company believed China to be emerging as the most promising market in the world for the technology.

CPV pipeline
Once completed, the Golmud farm will represent one of the largest CPV installations anywhere in the world. The largest CPV farm to have been completed in the US so far is a 5 MW installation by market-leading Amonix in Hatch, New Mexico, but a number of much larger CPV projects are in the pipeline.

In the US, that includes Amonix’s planned 30 MW farm in Colorado, while rival CPV systems company Soitec is aiming to deploy more than 300 MW to planned utility-scale CPV facilities in southern California.

Soitec is building a new module factory in San Diego with an annual capacity of 200 MW to supply those projects. Within the past month it has also secured financing for a 50 MW CPV farm to be built in South Africa, while signs of a possible new CPV location are emerging in Soitec’s own domestic market in France – just last week the company said that CPV proposals accounted for 72 MW of a total 115 MW plans submitted in response to a call for tenders by the French Energy Regulatory Commission.

Recent activity in the CPV space appears to be in direct contrast to the problems impacting mainstream PV, which in general does not use concentrating optics. The wider industry is grappling with huge overcapacity, investigations into alleged unfair trading practices by heavily subsidized Chinese firms, and waning demand in Europe, where the feed-in tariff mechanisms that have supported the industry thus far are being wound down.

More promising CPV developments have included a $19.2 million venture finance deal and volume manufacturing agreement signed by Solar Junction – developer of the most efficient solar cell ever seen – and investment from blue-chip firms such as Chevron, ABB and Siemens.

• Emcore’s contract manufacturing activity in Thailand was hit hard by last year’s floods in the country, but the company’s CPV business was unaffected. Emcore makes multi-junction cells at its US headquarters in Albuquerque, while modules are now largely manufactured via the Suncore venture in China.