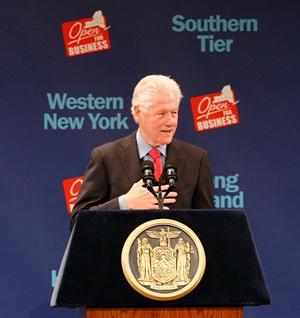 Five of the world’s leading semiconductor companies are to invest $4.4 billion in New York, kicking off two major development efforts across five locations in the state to advance next-generation chip technologies.

The investment comprises two major projects – one led by IBM to produce its 22 nm and 14 nm chip ‘nodes’, and a second involving IBM and four other leading manufacturers to develop process technologies for 450 mm (18-inch) wafer production, a major step up from the current standard 300 mm (12-inch) platform. That group calls itself “The Global 450 Consortium”.

The switch will require an entirely new set of tools for key processes involving optics and photonics technologies, such as lithography, photomasking, quality control, and test and measurement systems.

IBM will join forces with industry leaders Intel, Samsung, the Taiwan Semiconductor Manufacturing Company (TSMC) and Global Foundries, while in a separate development Intel is to establish its 450 mm East Coast Headquarters in Albany to support the overall management of the project.

All told, the investment is expected to create 2500 new high-technology positions in the area, with Governor Andrew Cuomo saying that the average salary for the jobs created will be $100,000. “The goal is to create good jobs,” he stressed at a press conference to announce the development. “This unprecedented private investment in New York’s economy will…make the state the epicenter for the next generation of computer chip technology.”

Around 800 new positions will be generated at the College for Nanoscale and Science Engineering (CNSE) Albany Nanotech Complex through the investment, while IBM will add 950 positions across its two sites in Yorktown Heights and East Fishkill. Another 450 are expected at the SUNY Institute of Technology in Utica, along with 300 at the CNSE Smart System Technology & Commercialization in Canandaigua.

Energy-efficiency allowances
New York has attracted the global leaders partly through a $400 million support package. None of the private companies involved will receive any of the state funding, but they should benefit indirectly from the investment into the CNSE in Albany, which includes $100 million earmarked for energy-efficiency and low-cost energy allowances. As with the private investment, that funding will be applied over a five-year period.

Intel CEO Paul Otellini described the investment and the Global 450 Consortium as critical to moving the larger manufacturing platform, which will enable production of more than twice as many chips on a single wafer compared with the current state-of-the-art. “This new technology will reduce the cost of production, increase productivity for manufacturers and reduce our environmental footprint on a per-chip basis,” he said.

For Silicon Valley’s Intel, the development represents the company’s first major investment in New York. Conversely, IBM has a 100-year connection with the state, having built its headquarters there in 1911, and major research centers in East Fishkill and Yorktown Heights. “IBM continues to invest in New York because of the strong business climate and talent here,” noted the company’s senior VP and director of research John Kelly III. Meanwhile, Global Foundries is currently building a new semiconductor fab in the state.

Assembly Speaker Sheldon Silver, who along with Cuomo has been working on the $400 million package over the past year, said that the multibillion dollar investment was what the state had been aiming for ever since it provided initial funding for CNSE: 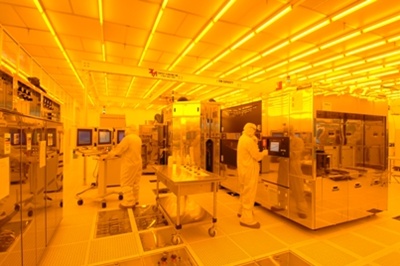 Among the any centers of excellence at CNSE are the Center for Nanoscale Lithography, the International Venture for Nanolithography and the Applied Materials R&D Center, as well as the new US Photovoltaic Manufacturing Consortium. It is also home to Sematech, the 12-strong consortium of chip manufacturers - including the five involved in the latest investment.

“This kind of announcement is exactly what we envisioned 15 years ago, when we provided crucial funding that would lead to the CNSE – the largest, most state-of-the-art, high-tech complex in the academic world,” Silver said.

The companies involved will also support a $15 million fund aimed at increasing the impact of minority- and women-owned businesses, while it is hoped that the initial investment may eventually result in the construction of a 450 mm wafer fab in New York, something that would be likely to cost in excess of $10 billion alone.