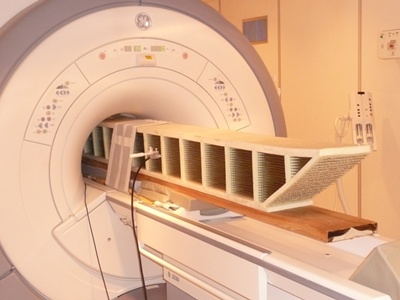 Researchers in a newly opened St Petersburg laboratory are aiming to be among the first to commercialize components based on functional metamaterials. The team, based at Russia’s National Research University of Information Technologies, Mechanics and Optics (ITMO), sees strong potential in medical imaging applications, and is already working on prototypes.

Metamaterials are structures engineered to interact with light in ways that are not observed in nature, for example to produce effects such as sub-wavelength imaging and the possibility of “cloaking” devices to hide objects or even people.

Although metamaterials is a subject at a very early stage of development, the St Petersburg team is already thinking about “real-world” applications of the technology. “We are going to design [micron-scale] elements to replace the electronic chips and devices used at present,” said Yuri Kivshar at the official opening of the new metamaterials laboratory – of which the Australia-based Kivshar is a research advisor - in St Petersburg on September 2.

MRI applications
At the moment, it is the microwave and radio frequency regions that look the most promising, they say: “Magnetic resonance imaging (MRI) is one of the most suitable areas of potential application, due to the fact that it operates in a narrow frequency band,” the team told optics.org.

MRI works by using an RF signal at around 100 MHz to flip the spin of protons that are aligned with the magnetic field applied within the scanner, and then detecting the low-energy photons emitted after the magnetic field is switched off. Protons in different types of tissue relax at slightly different rates, allowing a diagnostic image to be built up. But one of the limitations of the technique is its spatial resolution.

Led by Pavel Belov, head of the St Petersburg laboratory, the team is developing ways to provide sub-wavelength resolution for MRI, using metamaterials. Their prototype imaging device is formed by an array of parallel conducting wires, known as a “superlens”. These wires enable evanescent wave components to be transformed into propagating waves, they explain, suggesting that a simple remote receiver could be used in conjunction with an MRI scanner – as well as improving both the signal-to-noise ratio of the technique and its resolution.

Spin-out support
At the moment, their prototype metamaterial devices are extremely large and barely fit inside a conventional MRI scanner – and take a week to produce, test and calibrate. Clearly there is plenty of work still to be done before any commercial development, but thanks in part to some relatively recent changes to Russian law, there is at least now a route for researchers in the country to do this.

Nina Yanykina, director of the center of project appraisal at ITMO, explains that commercial spin-off companies from Russia’s universities were made possible by the introduction of Federal Law 217 in August 2009 – the country’s equivalent of the 1980 Bayh-Dole Act in the US that gave spin-off companies control over their inventions.

“This allows universities to be the founders of companies engaged in the implementation of intellectual property rights that belong to these institutions,” Yanykina said. “Enterprises created by universities and research institutions receive the status of SMEs, allowing them to take advantage of lower taxation and other fees.”

With a variety of funding sources now available for start-ups in the country, via institutions such as the Skolkovo Foundation, the Russian Venture Company, VTB Venture Fund and Rusnano, ITMO has been quick to capitalize, creating no fewer than 24 enterprises and also attracting foreign partners. In 2010, ITMO enterprises attracted funding of more than 11 million rubles ($0.36 million), Yanykina added.

Meanwhile in the UK, the Engineering and Physical Sciences Research Council (EPSRC) has devoted £6.3 million ($9.9 million) to a six-year program on nanostructured photonic metamaterials hosted at the University of Southampton’s Optoelectronics Research Centre (ORC). That project has been headed up by Nikolay Zheludev since 2009.

And at the Australian National University’s Centre for Ultrahigh Bandwidth Devices for Optical Systems (CUDOS), work on functional metamaterials is a flagship project – under the leadership of the same Yuri Kivshar now advising at ITMO in St Petersburg.