Grenoble-based NikkoIA is among the winners in a national contest designed to support small companies with innovative technologies. 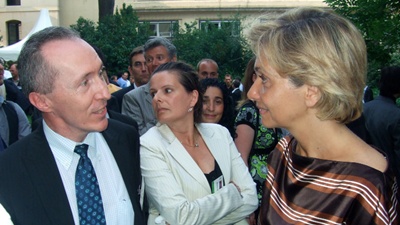 The French Ministry for Higher Education and Research has selected several photonics technologies in its latest national contest supporting innovation and start-up creation.

As part of the award, winners receive a grant towards their research and development spending, and since 1999 the annual contest has handed out more than €330 million in total.

This year, 67 companies winning at the “national” level received an average grant of €215,000. Among the winners to specialize in photonics are the Grenoble-based start-up NikkoIA, which is developing a hybrid organic-inorganic structure for infrared sensor applications under a license from Siemens.

Alain Jutant, NikkoIA’s president and CEO, received the company’s award from Valérie Pécresse – until last week the Minister of Higher Education and Research, but since promoted to Minister of the Budget following Christine Lagarde’s appointment as chief of the International Monetary Fund - at a ceremony in Paris on June 28.

“This national recognition by a jury of experts confirms the potential of our technology and our industrial project,” said Jutant. “NikkoIA will use the funding prize to accelerate the development of its new products.”

Although NikkoIA would not disclose the exact size of the grant that it is receiving, David Richard from the company said that it had been awarded a “significantly higher amount” than the average €215,000 figure.

NikkoIA was among 67 companies to win in the “Creation-Development” category at the national level, out of more than 800 applications. Other photonics companies and projects to win in the same category include:

• Aurea Technology: based close to the Swiss border in the town of Besancon, Aurea is another infrared detector start-up, and specializes in single-photon counters for various application including astronomy, lidar and biophotonics. It began operations in September 2010 and will be exhibiting at Photonics West 2012.

• Aerovia: this Reims-based company, also founded in 2010, is developing opto-acoustic trace gas analysis products under CEO and founder Ronan La Loarer, previously COO at Intexys Photonics. Products include the “QCNose”, a photoacoustic spectrometer based on quantum cascade laser sources for detection of greenhouse gases, methane, and traces of explosive materials.

According to the Ministry of Higher Education and Research, the awards program has a good track record of identifying commercially viable technologies and early-stage companies. Of some 1300 companies either supported or created over the past 12 years, 90% are said to still be in existence.

Pécresse highlighted that aspect of the recognition at the awards presentation, saying: "Being awarded at the national contest for support of innovative technology companies creation is not only receiving a financial grant, not only benefitting from a technical, administrative or legal support. It is first and foremost an acknowledgment as a promise of economic success."