Sales of high-power lasers and VCSELs remain strong, but the optoelectronics manufacturer is suffering from an unstable telecom market. 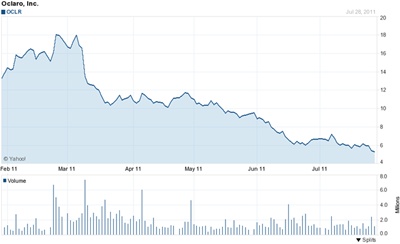 Shares in the optoelectronics firm Oclaro slumped 10% in early trading after the company released its fourth-quarter and full-year results for fiscal 2011.

Although full-year revenues were up 19% year-on-year to $466.5 million, there was a slowdown in the final quarter, with sales down by around 6% sequentially to $109.2 million. That translated to a quarterly net loss of $36.7 million – although the figure was compounded by a $20 million write-down of goodwill relating to wavelength-selective switch products.

Full-year profitability also took a hit, with Oclaro posting an annual net loss of $46.4 million – swinging back into the red after it had made a profit of $12.4 million during fiscal 2010.

The chief reason for that is an extended slowdown in the telecom market, which still accounts for the vast majority of the company’s sales, despite efforts to diversify the business with products such as VCSELs used in smart phones, filters and high-power diodes for fiber lasers and medical applications.

Those efforts are having some effect, with sales of non-telecom products growing 10% sequentially to reach $15.1 million in the latest quarter. But with the optical communications sector stuck in the doldrums, something that Oclaro’s CEO Alain Couder attributes to wider macroeconomic concerns, the company’s network-building customers have very limited visibility of future demand.

As a result, the market for Oclaro’s telecom products is patchy and unstable, with pressure on prices in what is still a very competitive space – although Couder believes that the phase of inventory correction that has been ongoing for the past few months is now largely over.

Fiber laser momentum
The CEO highlighted non-telecom applications in cosmetics – for example anti-wrinkle and hair removal treatments – as solid growth areas for the business, and also noted the momentum for fiber lasers in evidence at the LASER 2011 trade show in Munich two months ago.

As a merchant supplier of high-power diodes, the difficulty for Oclaro is that IPG Photonics, which has its own internal supply of such diodes, remains a highly dominant force in the high-power fiber laser sector. Although competitors are beginning to emerge in the shape of the Trumpf subsidiary SPI Lasers, Rofin’s Nufern unit, GSI Group’s JK Lasers and Coherent, IPG is very much the market leader.

Couder singled out Oclaro’s three-chip, 25 W laser emitter (BMU25) as gaining “very good traction” from fiber laser developers, while the company has significantly beefed up its research and development spending in recent months.

The CEO said that the company’s focus had been on strategic acquisitions in fiscal 2009, moving on to integration, innovation and scaling in 2010. In the past 12 months, the emphasis has been faster innovation and improved manufacturing processes.

And the company’s figures certainly reflect that claim – spending on research and development grew from $41 million in fiscal 2010 to $65 million in the year just completed. As a result, says Couder, Oclaro’s future product pipeline – such as more powerful versions of its 25 W emitter for fiber lasers - is in good shape, and the company enters its current fiscal year with “strong product momentum”.