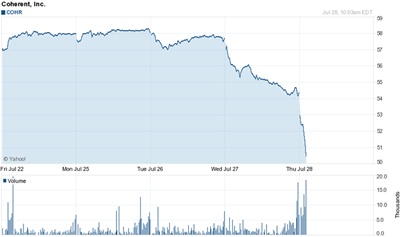 Coherent has revealed details of a huge order for excimer lasers in its latest financial update. The Santa Clara, California, photonics company received a $77 million order in its third quarter, which ended July 2, and has already booked a $22 million chunk of it - with the remaining $55 million set to be added over the next two quarters.

CEO John Ambroseo, who described the win as “hitting the mother lode”, said that the company would be making around a $25 million total investment in manufacturing space and research and development spending in order to develop and produce a modified excimer source, new beamline optics to produce the required process conditions for a key annealing step, and service support for what he called a “terrific short and long-term opportunity”.

“Each of the next-generation lasers and optical systems, which sell for well over $7 million each, support display sizes well beyond anything being laser-annealed today,” Ambroseo added, saying that the company would step up its R&D spending by $5-6 million, predominantly for materials, over the next year. The next-generation lasers will also be much larger than their predecessors.

“We do not have enough manufacturing space in our existing facility to build them, and are in the process of acquiring a building adjacent to our Göttingen site,” said Ambroseo. Because of the expected heavy use of the excimer sources, the company will also need to supply hundreds of replacement laser discharge units (LDUs) each year as part of a service agreement – meaning that further investment will be needed.

“Our current LDU capacity is inadequate to support this demand,” Ambroseo said. “Moreover, given the concentration of recent orders in Korea, we will open an LDU refurbishment facility in the country. We are in the process of leasing space and hiring staff for this facility.” The total investment being made by Coherent in plant, property and equipment in Korea and Göttingen is around $25 million, added the CEO.

OLED application
In an investor call to discuss the company’s latest results, Ambroseo also mentioned that its FPD orders were “skewed towards organic LEDs”. LG and Samsung, both located in Korea, have led the adoption of OLED displays in phone handsets over the past two years, while Samsung is understood to be planning a large investment in scaling up the technology for future generations of OLED televisions. The suggestion that Coherent’s excimer lasers will be used to anneal large-size displays would appear to indicate that this is a likely destination for the systems.

One difficulty that is causing Coherent some concern is the availability of the large ultraviolet optics needed to shape the beam produced by the excimer source. The high-quality components are difficult to manufacture and, as such, only a handful of companies are able to supply them and ramping production is no trivial task.

“It is imperative that critical-item vendors meet their delivery commitments to us, and we are dedicating significant management bandwidth to keep them on-task,” stressed Ambroseo.

Increased guidance
Being able to ramp up supplies of those key components will also be a factor in whether Coherent is able to meet its new guidance for its full fiscal year. The company has increased its target revenue to between $800 million and $807 million, but CFO Helene Simonet stressed that the upper limit on that range would only be reached if supplies could be increased:

“We are highly dependent on timely delivery of core components,” she said. “It is not a small task for our suppliers to increase production from third-quarter levels, hence our caution. These critical components are integrated in our higher average selling price annealing lasers and any delay in supply deliveries will have a meaningful impact on the top line.” 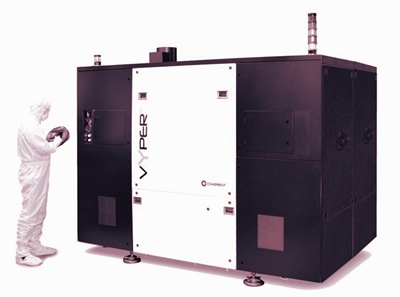 Meanwhile, with some of its competitors, notably Newport, making waves with a series of acquisitions in recent weeks, Ambroseo appeared to distance Coherent from any similar moves in the short term – despite the company’s very healthy cash balance of $267 million:

“We are always mindful of spending our shareholders’ cash,” the CEO said. “While I applaud some of our contemporaries in the market for the moves that they have made, I would argue that they have paid very high prices for the assets that they are acquiring. “It remains to be seen whether they can generate appropriate kinds of returns for the risks that they are taking.”

• Overall, Coherent posted record net sales of $210.9 million for the quarter, up 5% sequentially with microelectronics applications (which includes semiconductor and PV solar capital equipment and FPD applications) accounting for $105.4 million of that total. Pre-tax net income came in at $19 million – slightly down on the prior quarter as a result of lower margins – while bookings were also slightly down from a record high, at $228.5 million.