Key equipment suppliers for solid-state lighting sense a pivotal moment in the development of the nascent industry. 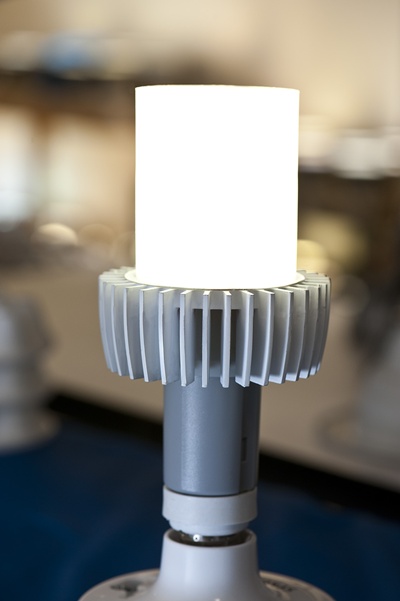 Paul Hyland, the CEO at the leading LED manufacturing equipment supplier Aixtron, believes that the lighting industry is at a pivotal crossroads in the transition to high-efficiency, solid-state lighting – brought about by a sharp reduction in the cost of LED-based replacements for traditional bulbs.

Making the comments as he presented Aixtron’s financial results for the first half of 2011, Hyland reported an “imminent market tipping point” for outdoor and commercial lighting applications, indicated by a shift of focus away from the lumens-per-watt metric and towards dollars-per-lumen.

“This is a very pivotal moment in the growth of the industry,” Hyland told investors. Although Aixtron’s sales fell in the latest quarter – a result of what the CEO called short-term volatility and some uncertainty surrounding subsidies for LED-making equipment provided by the Chinese government – orders remained strong and at €373.5 million Aixtron’s backlog is at a record level. The company has also maintained its full-year guidance range despite the current “choppy” conditions.

With a market share of more than 60%, Aixtron is the world’s leading supplier of metal-organic chemical vapor deposition (MOCVD) equipment – the tools used to deposit the ultra-thin layers of light-emitting semiconductor material on top of wafers.

China backlog
At the moment, more than two-thirds of the company’s backlog of orders originates from China, where state subsidies have resulted in a huge boom in MOCVD equipment purchasing over the past two years. This has in turn created an unsustainable number of potential LED suppliers springing up in the country, and the Chinese government is now expected to channel subsidies into a handful of favored manufacturers, once a second round of financial support is made available.

“The Central Government’s objective is to end up with five or six major Chinese players who can compete globally,” Hyland said. “The first phase saw a stampede of companies eager to take advantage of these subsidies and I’m afraid to say that some of those companies are unlikely to be there at the end of the race.”

Both Aixtron and its chief rival Veeco Instruments are witnessing an increase in the time period between orders booked in China and receipt of the full payment for tools, but any short-term worries on that front are put into context by the Chinese government’s continued very strong commitment to LED lighting.

Just last month, China’s Ministry of Science and Technology increased the country’s goal for penetration of LED lighting to 30% by 2015, while the technology has now been identified as one of seven key strategic industries. And although China’s initial focus will be on stimulating and meeting internal demand, the long-term plan is for the emerging industry leaders to become globally competitive and to export their LED technology.

Japan and Korea push adoption
Hyland also pointed to the sudden increase in uptake of LED lighting in Japan following the Fukushima disaster in March, which prompted electricity shortages and a strong local focus on energy-saving technologies.

But perhaps the strongest candidate for lift-off of the LED lighting revolution is Korea. The Korean government is providing some $185 million over the next two years towards energy-efficiency rebates and a switch to LED lighting in industry and across its public sector, while in Samsung and LG it is home to two of the world’s largest LED manufacturers by volume – albeit mostly for TV backlights.

“In our opinion, this combined commitment by both the South Korean government and industry to initiatives promoting energy-efficient LED lighting applications will not only create a momentum within the domestic Korean LED market, but is also likely to act as a positive catalyst to the – earlier than forecast – general adoption of LED lighting in other regions as well,” said Hyland.

Veeco has echoed those thoughts, estimating that Korea may spend $1 billion to accelerate LED lighting adoption in the current decade. In June, the government said that it would aim to have fitted 60% of public buildings with LED lighting by 2015, with full conversion by 2020.

Tipping point?
Hyland added that prices for LED-based replacement bulbs in some areas have now reached what Aixtron sees as a tipping point. “We believe that the key price tipping point, where the price for a 60 W equivalent LED could trigger real commercial demand, is somewhere between $20 and $15,” stated the CEO.

And, according to its survey of market intelligence from a variety of sources, that point is now being reached - in Korea and Japan. Aixtron says that the average price of an LED replacement for an A-19 bulb in Korea is now just $17 – comparing with $20 in Japan, $39 in the US and $58 in Europe.

“If that figure is right, then in Korea we are within that tipping point range,” Hyland added. “Both Samsung and LG are offering to their domestic market an increasingly broad range of LED lighting products and are now pursuing highly competitive pricing strategies.”

“Samsung, for example, is already offering a 60 W equivalent LED light bulb at about $17. This represents a 50% year-on-year market price reduction, which is a good measure of their focus on this market and their technical and cost-of-ownership progress over the last 12 months.”

To help speed that progress towards lowering the key $/lm metric, Aixtron also recently launched its largest-capacity MOCVD reactor yet. Its CRIUS II-L can handle either 16 four-inch wafers or 69 two-inch wafers – although it can also be configured for the larger six-inch and eight-inch formats being developed by leading LED makers.

Veeco, which released its new “MaxBright” MOCVD tool earlier this year, says that LED prices are now dropping much faster than predicted by Haitz’s law – the LED industry’s equivalent to Moore’s law in silicon semiconductors. The long-term Haitz trend line predicts a 20% year-on-year fall in LED average selling prices. But over the past year the average price of a 100-120 lm/W efficacy device has fallen by more like 50%, with a further decline of 5-10% expected by analysts in the current quarter alone.