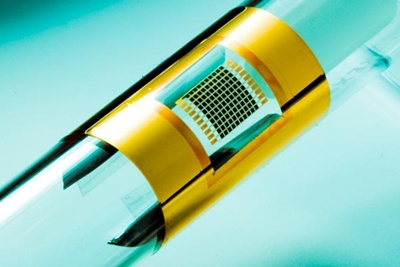 High-concentration photovoltaics (HCPV) company Semprius is to create up to 256 jobs in the next five years at a new pilot production plant in Henderson, North Carolina.

Originally a spin-out from the University of Illinois at Urbana-Champaign, Semprius will combine its recent first tranche of series C venture capital funding with a $7.88 million package of incentives from various North Carolina state sources to finance the facility – with construction slated to begin later this month.

Semprius has a different take on CPV than its more established rivals, and has developed a novel transfer printing process that allows the combination of extremely small cells with low-cost optics to yield modules with a concentration factor of more than 1000 suns.

The company said last month that the series C funding would be used to build a module plant, although at that time the location of the facility was not confirmed. CEO Joe Carr told optics.org that the pilot plant will have an initial module production capacity of 5 MW, with start-up expected in August 2012. That capacity could then be ramped to 35 MW, depending on the level of demand seen.

Venture interest
The company is one of many in the CPV sector to have landed significant venture finance in recent weeks, with the system developer GreenVolts and Morgan Solar also finding new investment.

Other key developments in the sector include Amonix' ramp of CPV system production at its new facility in Nevada, and Soitec's various agreements for utility-scale installations in the San Diego area. At the cell level, the optoelectronics giant JDSU has augmented its manufacturing expertise with the acquisition of assets from the UK company Quantasol, whose quantum well structures are highly regarded for their ability to deliver a higher power output from the cell.

Semprius has the additional credibility of an investment by the German engineering giant Siemens, which bought a 16% stake in the firm last month and led the series C round via its Siemens Venture Capital wing.

The two companies have been working together on demonstration systems for more than a year, with Siemens providing a two-axis tracker for an installation at Tucson Electric Power that was deployed in August 2010.

The significant difference between Semprius’ approach to HCPV and that of pioneers such as Amonix is in the size of the multijunction cells used to convert sunlight to electricity at high efficiencies. The Semprius modules feature gallium arsenide cells measuring only 600 µm by 600 µm – whereas a more typical CPV system will typically be around 100 times larger in area. The company says that the tiny cells enable the use of low-cost optics and electrical interconnects, which also eliminates the need to cool the cells.

CEO Carr is expecting demand for CPV technology to grow quickly over the next decade, leading to a market of more than 6 GW by 2020. The current annual market for CPV installations is only around 50 MW, with Amonix taking the lion's share.

However, the technology appears to have overcome a large degree of skepticism in the wider PV scene over the past couple of years, thanks in part to the involvement of larger companies and respected financial institutions that have provided the all-important "bankability" factor.

"We believe HCPV solar technology is leading us toward achieving grid parity with fossil-based fuels, and we're proud that the state of North Carolina and Vance County find our technology as important to the future of clean energy as we do," added Carr.