Addition of businesses with combined annual revenues of around $150 million will take company close to its 2013 goal. 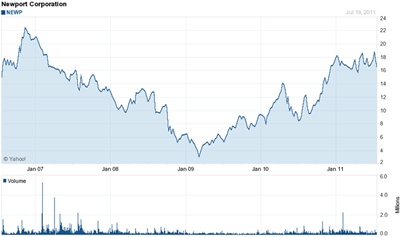 After announcing two acquisitions within the space of a few days, Newport – the home of such well-known photonics brands as Spectra-Physics and New Focus – is now looking at ways to secure additional debt financing in the second half of the year, as it strives to further increase shareholder value in the firm.

“We are in the process of determining [our] optimal financing and debt structure, [and] expect to execute in late Q3 or early Q4,” the company says in its latest investor presentation, hinting at increasing its debt finance to as much as $250 millon.

Though one of the best-known names in the industry, the Californian company has been regarded as undervalued by Wall Street over recent years – perhaps an extended hangover from the telecom bubble days, when its stock price peaked at much higher levels than its rival Coherent. And, even now, Mark Douglass from Longbow Research says that Newport trades at a discount to its peer group (Douglass has set a target price of $25 for Newport – a level not seen for more than ten years).

Three-pronged growth strategy
The company has been employing a three-pronged strategy to grow profits: through organic global expansion; subsystem and system integration; and mergers and acquisitions. Until July 8, that third prong was conspicuous by its absence, given Newport’s strong cash generation throughout the boom of the past year. That has been fueled to a large degree by the buoyant microelectronics industry, which currently accounts for close to one-third of the company’s total revenues.

But Newport cannot rely on the microelectronics industry demand remaining at such high levels, and the twin acquisitions of Ophir Optronics and High Q Technologies just announced will certainly help to reduce the parent company’s exposure to the strong swings of the semiconductor demand cycle - post-acquisitions, microelectronics will account for only a quarter of Newport's business (at current demand levels).

Those additions should also propel Newport close to its 2013 target of reaching $750 million in total revenues. In mid-2009, when Newport was posting only around $80 million in quarterly sales, that would have looked a very distant goal indeed. Now, with second-quarter 2011 revenues expected to be around $130 million (Newport reports its Q2 results on August 3) and orders at record levels of $140 million, things look very different.

In its latest investor presentation, Newport suggests that, if historical growth rates are maintained, Ophir and High Q should contribute combined revenues of around $170 million in their first full year of operation under the Newport umbrella. Factor in some growth at historical levels for both the acquired businesses and Newport's existing portfolio, and that target starts to come into range. 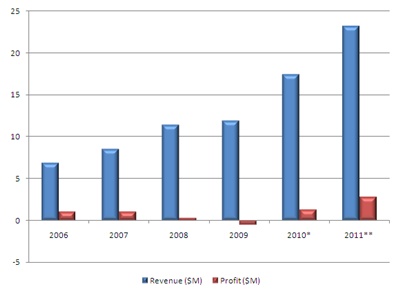 Family business
While Ophir will give Newport a much stronger presence in the defense and aerospace sector (which accounts for 43% of Ophir sales), High Q’s expertise in picosecond and femtosecond sources adds to an area where the Spectra-Physics division already has significant strengths.

Since it was set up in Austria by Daniel Kopf in 1999, the family-owned High Q business has grown to become one of the largest European manufacturers of ultrafast lasers, with 2011 revenues expected to be in excess of $20 million - and perhaps as high as $23 million.

What High Q brings to the table is a set of highly compact laser designs based on all-diode-pumped semiconductor saturable absorber mirror (SESAM) modelocking. With the advent of reliable high-power diodes, ultrafast lasers are now finding increased adoption in commercial materials processing applications, where reliability and a small footprint are core requirements.


Added value
But perhaps the real add-on value for Newport will be in the life and health sciences market, where CEO Robert Phillippy stresses that the application of femtosecond lasers in surgical procedures represents a key growth area that Spectra Physics has not penetrated. Opportunities for that growth include applications such as femtosecond laser treatment of cataracts - a potentially enormous market in an ageing population.

Provided that the two acquisitions are executed well (the Ophir deal still needs to go through regulatory authorities and will not be completed until the final quarter of the year), the profitability of both acquired companies should immediately add to Newport’s bottom-line performance.

Newport’s existing $127 million debt, in the form of convertible bonds, is due February 2012. The company is in the process of working out how best to re-finance the bonds. With a slide from its latest investor presentation suggesting that Newport may extend the debt to as much as $250 million, the company could be on the look-out for even more acquisitions in the future.

What Newport has certainly done already is identify ways to reduce its exposure to the most cyclical of photonics markets. It remains to be seen whether or not that translates to the shareholder value that the company aims to build.