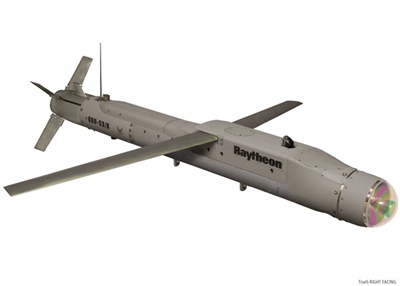 A new weapons system that uses three different guidance technologies to improve performance in bad weather has passed a key stage of development with the US Air Force.

The SDB II, a precision weapon designed to be launched from the air at both fixed and moving targets, features three different ‘seeker’ technologies that guide the missile to its destination: millimeter-wave radar; an uncooled infrared imager; and a semi-active laser.

The approach has other benefits, as Tom White, program director of the SDB II program at Raytheon, explained: “By using an uncooled seeker and other innovative approaches, we can reduce part count, which improves reliability and reduces the life-cycle and production costs of the weapon.”

$450 million contract
Tri-mode seekers are under development at both Raytheon and Lockheed Martin. Last year, Lockheed said that its Joint Air-to-Ground Missile (JAGM), which uses the same combination of imaging and seeking technologies, had hit a tank from a distance of 6 km in tests at the White Sands Missile Range in New Mexico.

Raytheon is working on the SDB II program under a $450 million contract awarded in August 2010, with delivery of the weapon scheduled to begin in 2013. The tri-mode seeker system has already undergone extensive testing, with apparent success:

"Raytheon's innovative use of an uncooled IIR [imaging infrared] seeker met all the warfighter's requirements and reduced the weapon's total life-cycle cost and logistics footprint," said Taylor Lawrence, the president of Raytheon Missile Systems, at the time of the SDB II contract award.

The company added that the tri-mode approach had shown its capability during a successful technical demonstration program, in which Raytheon verified that the seeker could transition seamlessly between the three modes. During flight testing, it flew 26 missions in 21 days without a single hardware failure, the company said.