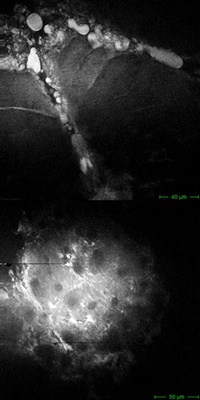 The ability to perform a true non-contact optical biopsy has taken a leap forward with the release of results from the first trials of coherent anti-Stokes Raman scattering (CARS) imaging on human volunteers. German company JenLab used its hybrid multiphoton fluorescence/CARS instrument to make the measurements and is now actively carrying out further clinical trials to assess the full potential of its system.

“JenLab's goal is to provide label-free optical biopsies with submicron resolution,” the company’s CEO Karsten Koenig told optics.org. “Existing clinical multiphoton biopsies provide precise information on the tissue architecture, the cell morphology and the elastin and collagen network. However, there are some ‘black’ areas in these biopsies due to the presence of non-fluorescent lipids and water. The addition of a femtosecond CARS system provides this information.”

A multimodal approach
To date, JenLab has performed label-free optical biopsies of human tissue in vivo using its clinical multiphoton tomographs, the DermaInspect and the Prism Award-winning MPTflex. These systems rely on a single tunable near-infrared (NIR) femtosecond laser source to create 3D images of endogenous fluorescent molecules such as flavins, melanin, keratin and elastin as well as second harmonic generation (SHG) to shed light on collagen content.

The key challenge has been introducing a second femtosecond laser beam into the optical path in order to generate the much sought-after CARS signal from water and lipids present in tissue.

The end result is a hybrid tomograph, the MPT-CARS, that combines the existing DermaInspect with a CARS module featuring a femtosecond optical parametric oscillator (OPO) from fellow German firm APE. The CARS signal is produced by exploiting the wavelength difference between the DermaInspect’s tunable femtosecond “pump” laser beam (710-920 nm) and the OPO’s “Stokes” beam (1000-1300 nm) which is tuned to match the vibrational modes of the molecule of interest.

“MPT-CARS is the first certified CARS system for clinical use,” said Koenig. “JenLab has permission to use NIR femtosecond laser beams with a combined maximum mean power of 50 mW and high numerical aperture (NA) focusing optics with a working distance of 0.2 mm. We faced many challenges: providing spatial and temporal overlap of the two beams in the focus of the high NA optics, performing optical sections within 10 seconds with high sensitivity and high signal-to-noise ratio, and detecting the signals from lipids, water, autofluorescence, and second harmonic generation.”

Validation studies
To examine the performance of the hybrid system, JenLab joined forces with clinicians from the European Union’s largest hospital, the Charite in Berlin. The study involved ten volunteers and nine patients. One aspect of the trial looked at the differences in CARS signals between healthy skin and areas of skin affected by psoriasis.

In order to image the intra-tissue lipid distribution in patients suffering from psoriasis, the MPT-CARS wavelengths were tuned to 811 nm and 1053 nm, respectively. The CARS signal from the lipids arises in the red at 660 nm due to the symmetric CH2 stretch vibration band near 2845 cm-1 and could be detected with a filtered photomultiplier. The standard acquisition time for an optical section measuring 0.4 x 0.4 mm was 7 seconds and up to 20 sections at different tissue depths were obtained per region of interest with a piezo-driven high NA objective.

“For the first time, the lipid distribution in humans could be measured,” commented Koenig. “Interestingly, the expression of the type of lipid and the distribution in a variety of skin diseases seems to be different than in normal healthy skin.”

The team is now planning additional clinical trials at the Charite, as well as other sites. “One of our next goals is to trace chemotherapeutics, which accumulate in the skin due to sweat glands,” said Koenig. “We will also spend time developing a more compact turnkey clinical hybrid multiphoton/CARS tomograph over the next 12 months.”