Fired from on board a US Navy ship, the Joint High Powered Solid State Laser ignited fuel tanks at the rear of a small boat. 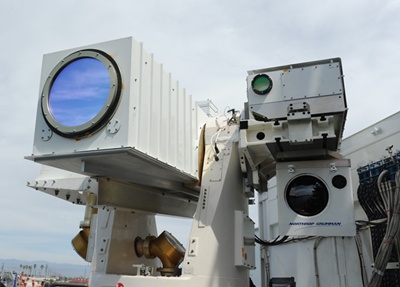 The Maritime Laser Demonstrator (MLD), a directed energy weapon being developed by the US Office for Naval Research (ONR) and Northrop Grumman, has destroyed a target boat in at-sea tests for the first time.

According to the ONR, the high-power system, which is being developed to defend warships from attacks by small boats carrying bombs or other weapons, “disabled” its target off the Californian coast on April 6.

Peter Morrison, MLD program manager at the ONR, said: “This is the first time a high-energy laser, at these power levels, has been put on a Navy ship, powered from that ship and used to defeat a target at-range in a maritime environment.”

The MLD system incorporates the Army’s Joint High-Power Solid-State Laser (JHPSSL), which is also being developed by defense contractor Northrop Grumman. Northrop received a $98 million contract to work on the MLD system in mid-2009, with an expected completion date of June 2014.

The MLD team says that, as well as the key accomplishment of destroying a boat from distance with a laser, the latest test also demonstrated that the system can be integrated with a ship’s radar and navigation system. Other important benchmarks included firing the system from a moving platform and in a humid, at-sea environment. That is significant, because humid conditions can make it very difficult to maintain a laser’s beam quality over a large stand-off distance – something that is required for the laser to be able to penetrate its target.

The video below shows how the laser was used to burn through the small boat’s fuel tanks, igniting the fuel inside and setting the vessel on fire.

Last September the MLD system showed the ability to burn through sections of boat when tested across the Potomac River, at which point at-sea tests were scheduled for late 2010. According to the MLD project schedule, the latest test will be the prelude to another four years of system development. Up to ten laser units are set to be evaluated during that time.

The JHPSSL system is one of many directed energy weapons being developed or tested by the US military under various programs. Others include free-electron lasers (FELs), which are at a much earlier stage of development, while fiber-laser projects such as the Robust Electric Laser Initiative (RELI) and the Revolution in Fiber Lasers (RIFL) programs are aiming to improve the electrical efficiency of the systems, which aids with the key problem of thermal management.

The general thrust of these projects is to develop solid-state laser technology in place of chemical lasers, which have featured in older projects such as the Boeing-developed Airborne Laser. But the complex systems and toxic nature of the chemicals used in those lasers means that they are not regarded to be plausible weapons in an environment such as on board a Navy warship.

However, the major drawback of the solid-state alternatives is their limited power output, when compared with “megawatt-class” chemical lasers. Although the MLD system is seen as a scalable approach, it is not expected to scale very far beyond 100 kW. 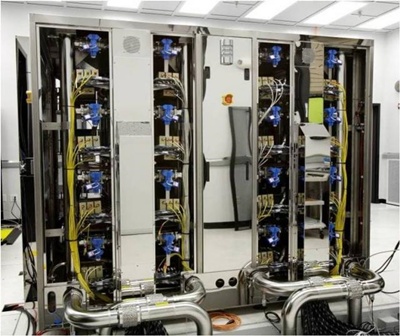 Aiming for "megawatt-class"
The Defense Advanced Research Projects Agency (DARPA) has funded a project called “Black Diamond” that aims to get around the problem. Under program manager Joseph Mangano, Black Diamond is looking at the potential for Raman beam combining as a way to produce a megawatt-class solid-state laser.

“The Black Diamond program will use optical, laser, and 3-D modeling, and computational fluid dynamics and finite-element analysis to examine the scaling potential of the concept, first to the 100-kilowatt level, then to the megawatt level,” states the Black Diamond project description. “Of particular interest is the potential for achieving better than 45 percent electrical efficiency and 5 kilograms per kilowatt specific mass at the megawatt level, representing a significant performance breakthrough in solid state high-energy laser technology.”