The solar cell and module maker's CEO is grilled by investors and shares crash 30% after its CFO resigns at a critical juncture. 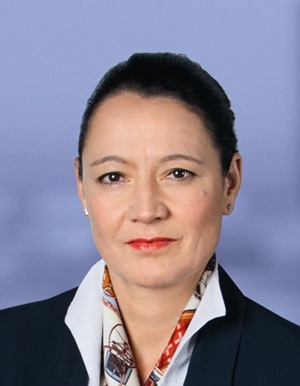 Q-Cells, the Germany-based manufacturer of solar cells and modules, came under pressure from investors in a fractious conference call as it reported its latest quarterly financial results on the same day that its CFO resigned.

Like many in the solar sector, the Bitterfeld-Wolfen company is battling against subdued demand, reduced incentives, cut-throat competition and plummeting prices. But Q-Cells has an additional problem in the form of a €200 million convertible bond repayment with a due date of February 28, 2012.

Having posted a loss before interest and taxes (EBIT) of €47.3 million in the third quarter of 2011, CEO Nedim Cen made clear in the Q3 investor call that Q-Cells might not be able to fully repay that bond – news that sent the company’s stock price tumbling 30%.

By the end of this year, Cen expects the company to have around €300 million in cash and equivalents on its balance sheet, but with up to €70 million of that cash pile restricted and the company continuing to pile up a loss, making the bond repayment is not a foregone conclusion.

Faced with the sudden departure of CFO Marion Helmes, who left the company on November 14 “by her own request”, and the news that Cen will take over her responsibilities while the company is in the process of finalizing a new business plan – as well as negotiating with bondholders and capital markets – some investors vented their frustrations.

Fractious investors
One investor in particular questioned the wisdom of the firm’s expansion outside Germany while there was a major question mark over its ability to pay creditors. Some suppliers appear to be anxious too – Cen revealed in the call that some were now insisting on being paid within one month instead of three.

Responding to the fractious investor asking why, after 18 months of discussions to restructure and refinance the company, it was still unclear when Q-Cells next expected to post a profit, Cen repeatedly cited the difficult and dynamic pricing environment, and insisted that things would become clearer by the end of this month when the company finalized its new business plan.

Among the measures already taken are a 250-person headcount reduction that is currently in progress and should be completed by year-end, and a 50% reduction to the company’s cell production capacity in Germany.

Cen described the pricing situation as “dramatic”, adding that cell prices were now at a level that Q-Cells might have reasonably expected to pay for its supply of silicon solar wafers just six months ago. In addition, the hoped-for Q3 pick-up in demand for PV products “failed to materialize”. In the quarter, it shipped products equivalent to 207 MW (peak), but produced only 156 MW – down, respectively, from 274 MW and 305 MW year-over-year.

Revenues of €228.8 million in the quarter were down more than 43% from a year ago, and accompanied by a net loss of €57.1 million. So far this year, Q-Cells has posted a net loss of €452.9 million as it works to reorganize its business in the light of market conditions that have changed drastically since it began that process.

The company – still one of the world’s largest cell producers outside of China – expects to post sales of around €1 billion for the full year, but these will accompanied by an operating loss of at least €100 million.

No respite
Meanwhile analysts at Solarbuzz are forecasting little in the way of respite in the early part of 2012. In their latest quarterly update on the European PV market, they said that module prices were 32% lower year-on-year at the end of the third quarter, and described the module price path as “collapsing so fast that it has left downstream companies needing to offload inventories or face significant write-downs”.

The analyst firm is now expecting Italy to take over from Germany as the world’s largest PV market in 2011, although the 15% cut to feed-in-tariffs set for Germany next year will ensure a short-term boost in demand from the country in Q4 ahead of the change.

Commenting on the proposed cut to the PV feed-in tariff in the UK, where the market is at a far earlier stage of development than either Germany or Italy, Solarbuzz noted that residents in the UK would retain attractive returns as module prices continued to fall. “However, the more important consequence of frequently changing incentive policies across Europe has been greater uncertainty and therefore higher risk,” it added. 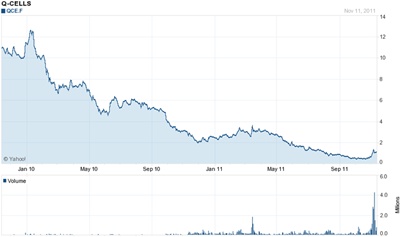 As a result of reduced incentives and that uncertainty, Solarbuzz forecasters now think that there will be a 72% sequential decline in the European PV market in the first quarter of 2012 – something that is likely to accelerate the current shake-out within the solar supply chain and heap yet further pressure on the likes of Q-Cells.

The company’s stock price plummeted 30% after the latest financial results announcement, while holders of the convertible bond that will become due at the end of February have appointed attorney Carlos Mack as their joint representative. One option for the company will be to defer the maturity of the bond from that date “under certain circumstances” – although only until the end of 2012 at the latest. Whether or not the bond will be restructured is set to be decided by the end of this month, Q-Cells said.