Japanese maker of photonic components and systems shows a 19% profit increase in its latest fiscal year. 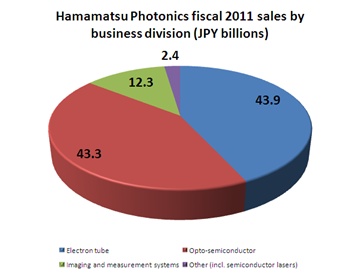 Strengthening demand for photonic components from the life sciences sector helped to outweigh the impact of the March earthquake and tsunami on the Japanese economy, said Hamamatsu Photonics as it reported a strong increase in sales and profit.

The Shizuoka Prefecture company, whose main products include photomultiplier tubes, silicon photodiodes and spectrometers, has just posted revenues of ¥101.9 billion ($1.32 billion) for the year ended September 30 – up 12% on the prior year.

Despite domestic sales to Japanese customers accounting for 34% of that revenue, coupled with the earthquake and the strengthening of the yen against other currencies, Hamamatsu Photonics was able to report a 19% year-on-year increase in net income to ¥13.7 billion.

All three of the company’s key reporting divisions – electron tubes, opto-semiconductors and imaging and measurement instruments – performed equally well, with each showing sales growth of at least 11%.

“Sales of X-ray scintillators, which convert X-rays into optical imaging for dental and breast imaging systems, did well,” added the company, while sales of silicon photodiodes were up as a result of demand from developing countries.

The only down side reported by the company was in digital slide observation systems, used in medical pathology, where a decline in sales was attributed to greater competition.

Despite the ongoing struggles in Japan and faltering western economies, Hamamatsu Photonics remains confident of further growth in fiscal 2012, albeit at a more modest rate. It is forecasting 6% sales growth to ¥107.7 billion, while profits are expected to jump by 7% to ¥14.7 billion.

The company, which now employs close to 3000 people, recently released a developmental version of a new terahertz spectrometer for analyzing liquid and powder samples in the far-infrared region of the spectrum. Developed in collaboration with Japan's New Energy and Industrial Technology Development Organization (NEDO), the instrument is expected to find use in pharmaceutical analysis and is set for a full commercial launch in 2012.

Hamamatsu has also recently teamed up with the Swiss company Lemoptix, a 2008 spin-off of the Ecole Polytechnique Fédérale de Lausanne (EPFL), to develop, industrialize and commercialize devices based on micro-optical electro mechanical systems (MOEMS).