Society tie-up has eye on advocacy

Executives at the Optical Society (OSA) and the Optoelectronics Industry Development Association (OIDA) have formed a strategic partnership seeking to establish “permanent ties” between the two organizations - although OIDA will remain a separate entity under the OSA umbrella.

Based in Washington, DC, OIDA is a non-profit trade association that represents US firms working in optoelectronics. It produces roadmaps and market reports, and also strives to provide advocacy to government, but is believed to have been looking to set up a formal partnership like this for some time after running into difficulties with funding.

“The OSA and OIDA have had a long partnership at many different levels,” Elizabeth Rogan, the CEO of OSA told optics.org. “When some of the OIDA’s programs that received government funding were discontinued, the OIDA and OSA started to pursue joint ventures, which resulted in our new strategic partnership. It was clear to our board that the work the OIDA does for the optoelectronics industry needed to be continued.” 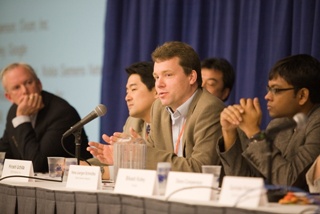 Formal union
Richard Grzybowski, OIDA Board Chair, echoed Rogan’s comments. “With this formal union, OIDA will be in a stronger position to serve the optoelectronics industry through its advocacy efforts, technical meetings, publications and member services,” he said.

“Now more than ever, associations such as OIDA are aligning with peer societies that share values and priorities. Our alliance with OSA will enable us to securely build upon our past accomplishments as we work to develop valuable new services and products.”

The first event where members of both societies will start to see evidence of the new partnership is a workshop on silicon photonics that will run in tandem with OFC/NFOEC 2011 in Los Angeles, California, on March 7. The event will feature a roundtable discussion, with participants discussing topics such as ‘Are we witnessing a historic shift from copper to optical’ and ‘Integration and packaging: How does the industry get off-the-chip’. The opinions gathered will form the starting point for producing a roadmap on the future of high-performance optical interconnects.

At the moment, Rogan says that the memberships of OSA and OIDA will remain separate entities. “Although the work of the OIDA is very complementary to OSA, our membership categories have different benefits,” she explained.

Jacqueline Hewett is a freelance science and technology reporter based in Bristol, UK. Additional reporting by Mike Hatcher