Nine awards handed out at the glitzy Photonics West 2011 event represent the cutting edge in optics and photonics technologies. 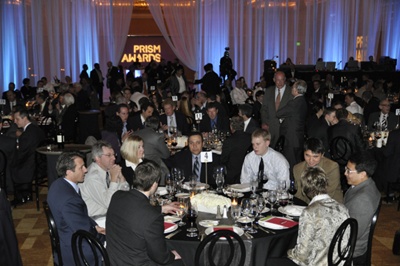 A quantum cascade laser spectrometer, a water analysis system and an industrial fiber laser were among the winners at the annual Prism Awards, held in conjunction with the Photonics West conference and show in San Francisco.

In all, nine awards were handed out at the event, demonstrating the wide range of applications in which optical technologies are indispensible. Winners included Block Engineering, whose LaserScan instrument for stand-off materials detection is based on quantum cascade laser technology, and won in the defense and security category.

IPG Photonics’ quasi-continuous-wave fiber laser scooped the award for industrial applications, while GE’s TruSense water analyzer, which can perform eight water-quality tests at the same time, won in the detectors and sensing category.

Highlighting the diversity of the winning entries and the creativity and expertise behind their development, SPIE’s CEO Eugene Arthurs said: “They will help customers be more effective and so be a part of the great photonics enterprise that has already contributed so much to enhance our lives, and that will play an increasingly important role in a sustainable future.”

In the biophotonics category, JenLab won for its tomographic system for melanoma detection and other skin imaging applications, while Lithuanian firm EKSPLA claimed the award for best scientific laser with its NT200 pulsed tunable system.

Another of the smaller companies to be recognized was Energetiq Technology, which has been generating lots of interest, particularly from the biophotonics field, for its novel EQ-99 LDLS wide-band light source based on a laser plasma.

The full list of Prism Award winners was as follows: