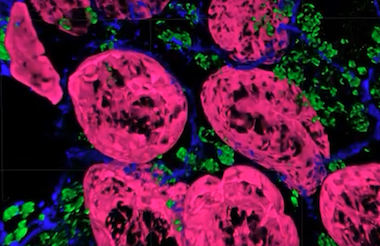 Expansion microscopy (ExM) is a route to bioimaging in which a crosslinked swellable hydrogel is used to physically expand fluorescently labelled tissues without disturbing the cellular structure.

Under the right conditions this can preserve the tissues being examined and enable nanoimaging with conventional microscopes, although the experimental protocols can be complex.

Previous research into ExM has included studies at MIT in 2019 in which expanded samples were then examined with lattice light-sheet microscopy, applying ExM to considerably larger tissue samples than was usually the case.

In 2020 the University of Wurzburg combined ExM with single-molecule localization microscopy, using a method in which fluorescence labeling is applied to a sample after expansion rather than before.

A project led by Carnegie Mellon University has now developed an experimental strategy for ExM christened Magnify, designed to enhance the technique's performance and ease of use. It allows researchers to use a new hydrogel formula, invented by the group of Carnegie Mellon's Yongxin Zhao, that offers a broader application to a variety of tissues, according to the project.

"We overcame some of the longstanding challenges of expansion microscopy," said Zhao. "One of the main selling points for Magnify is the universal strategy to keep the tissue's biomolecules, including proteins, nucleic acids and carbohydrates, within the expanded sample."

Magnify can expand biological tissues by a factor of 11 and achieve resolutions of around 25 nanometers, according to the project's Nature Biotechnology paper. Most ExM protocols have demonstrated only fourfold expansion, offering an effective resolution of around 70 nanometers, insufficient to resolve fine features such as molecular organization within individual synapses.

Magnify's hydrogel recipe uses a mix of dimethylacrylamide acid, sodium acrylate, acrylamide and methylenebisacrylamide. This preserves the nanoscopic features and cellular connectivity after expansion, features which can be imaged directly using commercial labeling agents applied either before or after expansion.

"In the past, to make cells really expandable you need to use enzymes to digest proteins, so in the end you had an empty gel with labels that indicate the location of the protein of interest," Zhao said. "With the new method, the molecules are kept intact, and multiple types of biomolecules can be labeled in a single sample."

In trials the Carnegie Mellon team used Magnify alongside super-resolution optical fluctuation imaging (SOFI), a computational method for enhancing the resolution from fluctuating fluorophores in sequences of images.

"When combined with SOFI, Magnify achieves effective resolutions approaching top performers of super-resolution light microscopy, yet does not require special equipment or fluorophores, and is easy to implement," noted the project in its paper.

Applied to human lung tissue samples, Magnify–SOFI was used to image the hollow structure of cilia and basal bodies. According to the project the outer ring of such bodies has previously been shown to include nine bundles of micro-tubules, and although Magnify alone was insufficient to consistently resolve all nine, Magnify–SOFI fully resolves these structures and their symmetry.

"With the latest Magnify techniques, we can expand those lung tissues and start to see some ultrastructure of the motile cilia even with a regular microscope, and this will expedite both basic and clinical investigations" said Carnegie Mellon's Xi Ren. "The lung tissue engineering community always needs a better way to characterize the tissue system that we work with."