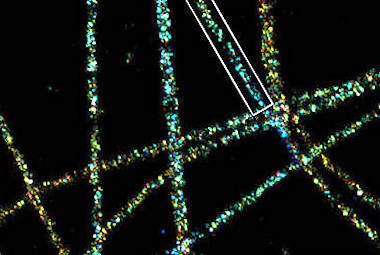 A project at the University of Würzburg has combined two microscopy techniques, expansion microscopy and single-molecule localization microscopy, into a super-resolution platform termed Ex-SMLM designed to image proteins at molecule-scale resolution.

Expansion microscopy (ExM) is a technique in which fluorescent probes marking the features of interest in a tissue are chemically linked to an infused gel, which remains in place after the tissue itself is digested away. The gel can then be expanded to create an enlarged phantom of the original sample, retaining the relative distribution of fluorescent tags but allowing them to be optically resolved even if they were too close together to permit this in the native tissue.

Enhancing ExM's inherent magnification effect by combining it with other techniques has been demonstrated before, such as the use of lattice light-sheet microscopy alongside ExM in a US project from MIT and UC Berkeley. But combining ExM with single-molecule localization microscopy (SMLM), in which a subset of the sample's fluorescent molecules is repeatedly imaged, has been challenging on at least three fronts.

"The fluorophore density is considerably diluted in expanded samples, which often results in unclear views of biological structures and complicates SMLM data interpretation," commented the Würzburg project in its Nature Communications paper. "Second, addition of a necessary photo-switching buffer can result in shrinking of the gel, in the worst case down to its initial size. Finally ExM uses free-radical polymerization, and free radicals can potentially react with the fluorophores and destroy them."

The Würzburg team tackled the problem by employing dSTORM (direct stochastic optical reconstruction microscopy), a variant of STORM super-resolution microscopy. dSTORM employs photoswitchable fluorescent probes that are directly cycled between a fluorescent and dark condition by irradiation, without the need for any additional activator species to be present.

The team's breakthrough involved a strategy of post-labelling ExM, in which fluorescence labeling is applied to a sample after expansion rather than before.

Combining single-molecule localization microscopy with post-labelling ExM offered a way to both limit flurophore destruction and reduce the parameter called the linkage error, a potential problem in SMLM referring to the space between the fluorescent label and the target protein. The net result of these improvements can potentially be fluorescence imaging with molecular resolution.

"By stabilizing the gel and immune staining only after expansion, we could overcome these hurdles and successfully combine the two microscopy methods," said Markus Sauer of the University of Würzburg.

In trials, the team applied its method to microtubules constructed from tubulin protein as a reference structure, and then to multiprotein cell structures termed centrioles. The team was able to visualize tubulin tubes as hollow cylinders with a diameter of 25 nanometres, and succeeded in sharply imaging groups of three tubulin structures located at a distance of 15 to 20 nanometres from the centrioles in a sample expanded by a factor of 3.2.

According to the project, the linkage error in a sample expanded to that degree would normally be 17.5 nanometers, but the team's post-immunolabelling and dSTORM technique reduced that error to 5 nanometers, making this form of fluorescence imaging with molecular resolution possible for the first time.

"For many important cell components, the combination of ExM and dSTORM now enables us to gain detailed insights into molecular function and architecture," commented Sauer. "The team therefore plans to apply the method to different structures, organelles and multiprotein complexes of the cell."