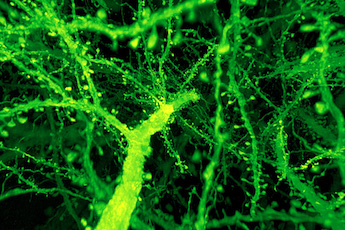 Advances in microscopy have allowed great strides to be made towards imaging of neural circuits across the brains of living animals, but significant challenges still remain.

A joint project between the two research groups of Ed Boyden at MIT, and Eric Betzig at the University of California, Berkeley and the Howard Hughes Medical Institute's Janelia Research Campus, has now developed a new microscopy technique able to image spatial relationships between proteins across the thickness of the cortex of a mouse brain, and across the entire brain of a Drosophila fruit fly.

The technique should enable statistically rich, large-scale studies of neural development, and structural correlations to behavior or neural activity, according to the group. The findings were published in Science.

"Optical and electron microscopy have made tremendous inroads toward understanding the complexity of the brain," commented the project team. "However, optical microscopy offers insufficient resolution to reveal subcellular details, and electron microscopy lacks the throughput and molecular contrast to visualize specific molecular constituents over millimeter-scale or larger dimensions. Super-resolution fluorescence microscopy combines nanoscale resolution with protein-specific contrast, but bleaches fluorophores too quickly for large-volume imaging, and would require months to years to image even a single Drosophila brain."

The team's solution was to combine two existing techniques—expansion microscopy and lattice light-sheet microscopy—in order to reveal the nanoscale spatial relationships between proteins and do so in more realistic timescales. In the published study this ultimately included images of synaptic proteins at dendritic spines, the formation of myelin along axons, and presynaptic densities at neurons in every fly brain region.

Expansion microscopy (ExM) is a chemical technique in which fluorescent species marking the features of interest in a tissue are chemically linked to an infused gel, which remains in place after the tissue itself is digested away. The gel can then be expanded to create an enlarged phantom of the original sample, retaining the relative distribution of fluorescent tags but allowing them to be optically resolved, even if they were too close together to permit this in the native tissue.

Lattice light-sheet microscopy (LLSM) sweeps an ultrathin sheet of laser light through a specimen, and collects the resulting fluorescence from above, one slice at a time. Eric Betzig, who shared the 2014 chemistry Nobel Prize for his work on super-resolution microscopy, has been a key figure in the development of LLSM through his work at the Howard Hughes Medical Institute, as a route to improved signal to noise performance and lower phototoxicity than some fluorescence-based microscopy techniques.

Hours rather than months

The two methods were combined into "expansion/lattice light-sheet microscopy," or ExLLSM, whereby ExM samples of brain tissues were created and then examined using LLSM. This involved applying ExM to considerably larger samples of tissue than was normal for the technique, so that complete neural circuits spanning millimeters or more could be imaged. Bespoke computational analysis then assembled the 3D image tiles into the final volume.

Tests showed that ExLLSM was capable of imaging volumes of approximately 60 by 60 by 90 nanometers over the whole thickness of a mouse cortex or the entire volume of a Drosophila brain. Imaging the fly brain in multiple colors took 62.5 hours, as opposed to the "months to years" mentioned by the project as being required by existing modalities.

In its paper, the team noted that although it has started to apply the technique to other organ tissues, such as the human kidney, it may prove to be the case that brain tissues are the ideal candidates for ExLLSM, owing to their comparatively homogeneous mechanical properties and easy digestion in the ExM stage. The impact of the technique in the study of those brain tissues and neural networks may now be considerable.

"Thanks to its combination of high imaging speed, low photobleaching rate, and 3D nanoscale resolution, ExLLSM extends, by at least 1000-fold in volume, the ability of super-resolution fluorescence microscopy to generate detailed images of subcellular ultrastructure." noted the project team.

Eric Betzig commented that he can envisage being ultimately able to image at least ten fly brains in one day, allowing scientists to realistically assess questions relating to the difference between male and female brains, or how brain circuits vary between individual flies of the same size.

Ed Boyden foresees making a map of the brain so detailed you can simulate it in a computer. "We’ve crossed a threshold in imaging performance," he said. "That’s why we’re so excited. We’re not just scanning incrementally more brain tissue, we’re scanning entire brains.”