Developers describe it as “a significant miniaturization advance for quantum optics and laser displays for AR/VR”. 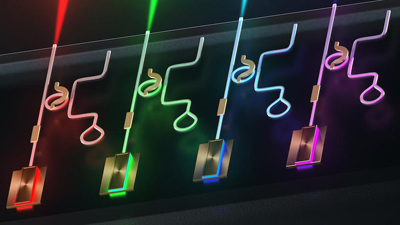 In a significant advance for impactful technologies such as quantum optics and laser displays for AR/VR, Columbia Engineering’s Lipson Nanophotonics Group has invented what it calls “the first tunable and narrow linewidth chip-scale lasers for visible wavelengths shorter than red”.

The development team comments that “integrated photonics has been missing a key component to achieve complete miniaturization: high-performance, chip-scale lasers”.

The breakthrough announcement adds, “While some progress has been made on near-infrared lasers, the visible-light lasers that currently feed photonic chips are still bench top and expensive. Since visible light is essential for a wide range of applications including quantum optics, displays, and bioimaging, there is a need for tunable and narrow-linewidth chip-scale lasers emitting light of different colors.”

Fits on a fingertip

Researchers at Columbia Engineering’s Lipson Nanophotonics Group have created visible lasers of very pure colors from near-ultraviolet to near-infrared that fit on a fingertip. The colors of the lasers can be precisely tuned and extremely fast – up to 267 petahertz per second, which is critical for applications such as quantum optics.

The team is the first to demonstrate chip-scale narrow-linewidth and tunable lasers for colors of light of shorter wavelength than red – green, cyan, blue, and violet. These inexpensive lasers also have the smallest footprint and shortest wavelength (404 nm) of any tunable and narrow-linewidth integrated laser emitting visible light. The work is described in Nature Photonics.

“What’s exciting about this work is that we’ve used the power of integrated photonics to break the existing standard that high-performance visible lasers need to be bench top and cost tens of thousands of dollars,” said the study’s lead author Mateus Corato Zanarella, a PhD student who works with Michal Lipson, Higgins Professor of Electrical Engineering and professor of applied physics.

“Until now, it’s been impossible to shrink and mass-deploy technologies that require tunable and narrow-linewidth visible lasers. A notable example is quantum optics, which demands high-performance lasers of several colors in a single system. We expect that our findings will enable fully integrated visible light systems for existing and new technologies.”

The researchers solved the coupling loss problem by choosing Fabry-Perot (FP) diodes as the light sources, which minimizes the impact of the losses on the performance of the chip-scale lasers.

Unlike other strategies that use different types of sources, the team’s approach enables the realization of lasers at record-short wavelengths (404 nm) while also providing scalability to high optical powers, FP laser diodes are inexpensive and compact solid-state lasers widely used in research and industry.

However, they emit light of several wavelengths simultaneously and are not easily tunable, preventing them to be directly used for applications requiring pure and precise lasers. By combining them with the specially designed photonic chip, the researchers are able to modify the laser emission to be single-frequency, narrow-linewidth, and widely tunable.

The team overcame the propagation loss issue by designing a platform that minimizes both the material absorption and surface scattering losses simultaneously for all the visible wavelengths. To guide the light, they used silicon nitride, a dielectric widely used in the semiconductor industry that is transparent for visible light of all colors.

“As a laser manufacturer we recognize that integrated photonics will have a tremendous impact on our industry and will enable a new generation of applications that have so far been impossible,” said Chris Haimberger, director of Laser Technology, at Toptica Photonics. “This work represents an important step forward in the pursuit of compact and tunable visible lasers that will power future developments in computing, medicine, and industry.”

The researchers, who have filed a provisional patent for their technology, are now exploring how to optically and electrically package the lasers to turn them into standalone units and use them as sources in chip-scale visible light engines, quantum experiments, and optical clocks.

“In order to move forward, we have to be able to miniaturize and scale these systems, enabling them to eventually be incorporated in mass-deployed technologies,” said Lipson. “Integrated photonics is an exciting field that is truly revolutionizing our world, from optical telecommunications to quantum information to biosensing.”