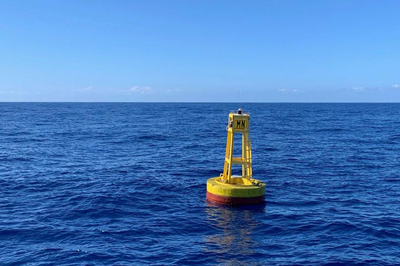 Marine Optical Buoy (MOBY) is located 20km off the coast of Hawaii.

Ocean-borne phytoplankton collectively absorb almost as much carbon dioxide as all the trees and land plants on Earth. Besides giving seawater a greenish tinge, the plankton have a significant impact on climate, and scientists can study that impact by measuring the color of the ocean using satellites and sea-based sensors.

To ensure satellite measurements are accurate, researchers in the U.S. and many other nations rely on an ocean-color sensor called the Marine Optical Buoy (MOBY). Now, the U.S. National Oceanic and Atmospheric Administration, Moss Landing Marine Laboratories, the University of Miami and National Institute of Standards and Technology are collaborating on an upgrade to the sensor, known as MOBY-Refresh, to enable more precise and accurate measurements of sunlight’s wavelengths.

NIST researcher Carol Johnson explained, “MOBY measures how much light over a range of wavelengths is being scattered out of the water at a single location in the Pacific Ocean. The ocean-color satellite sensors observe the oceans, including the MOBY site. The MOBY data then are delivered to the satellite teams, which use the data to adjust the satellite sensors’ calibration, thus improving the accuracy of the global data products such as the concentration of chlorophyll.” 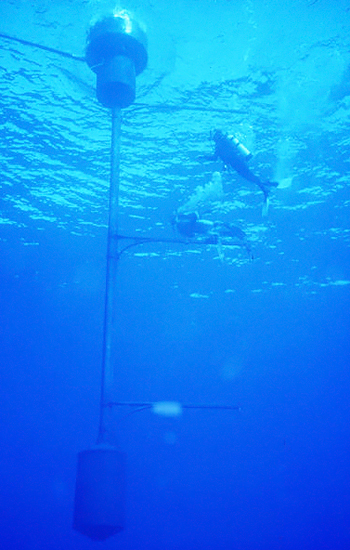 MOBY is a reference instrument for satellite measurement of the ocean.

The optical buoy has a central mast that extends underwater. The mast has three pole-like arms, each with optical fibers that collect light. The optical fiber collectors detect light at depths of 1m, 5m, and 9m. At the bottom of the central mast are spectrographs, which measure light as a function of wavelength at each of the three depths.

MOBY is located 20km off the coast of Lanai, Hawaii, because this location offers optimal atmospheric and water conditions for the calibration of ocean-color satellite sensors. The ocean water there is representative of the rest of the world’s oceans as it is clear and has a low level of chlorophyll. The atmosphere is also clear with few clouds, which ensures the usefulness of the measurements on a global scale.

“The life cycle of the optical buoy is around four months, and there are two complete systems. The one in the water is recovered on the same cruise as the new one is deployed,” said Johnson. “The one in the water takes data and the one recovered is refurbished for the next operation,” she said. MOBY has been in operation since 1997 and is currently on its 74th deployment of the optical buoy.

In the Refresh project, MOBY is being upgraded with a new optical system, support structures and control system. The aim was to replace the aging hardware and decrease uncertainties in the measurements. A second mooring buoy was deployed in January 2021, and the first upgraded optical buoy was deployed there in late February 2022. Analysis of the data is ongoing, but initial comparisons to MOBY Buoy276, currently in the ocean, are “very encouraging”, Johnson said.

For the optical system, the upgrade includes an improved spectrograph that can measure sunlight at all three depths simultaneously, which reduces environmental sources of uncertainty, including fluctuations in buoy tilt and arm depth and the fluctuations in light as it is focused by ocean waves. The optical buoy is now made of carbon fiber, whereas before it was made from fiber glass and metal, making the structure more robust and increasing its lifetime at sea.

In parallel to MOBY-Refresh the team is developing similar instrumentation called MarONet, which will be used by an upcoming NASA satellite mission called PACE(Plankton, Aerosol, Cloud, ocean Ecosystem). The instrument design of the optical system will be the same as Refresh but features a more portable buoy.

The deployment site for the MarONet buoy will be off the coast of Western Australia, and the central location for calibration and maintenance of the buoy will be in Hawaii, where the main MOBY hub is located. NIST’s role in this process will be to check for any changes in the optical system during transportation. The site planning for Australia has begun, under the direction of co-investigator David Antoine of Curtin University in Perth. In 2023, the optical and mooring buoy equipment will be shipped to Australia.