Described by the company as a “milestone to help move toward the goal of laser fusion.” 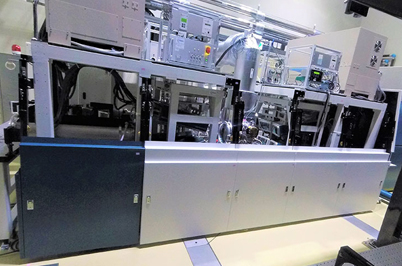 External view of the laser system producing laser pulses of 100 J at 10 Hz.

Hamamatsu Photonics has succeeded in creating laser pulses with energy of 100 J at a high repetition rate of 10Hz. This was achieved by increasing the cooling capacity for the laser medium of the pulsed laser system and by optimizing the output of the laser diode module for pumping.

To make laser fusion practical, the fusion fuel needs to be efficiently irradiated with a pulsed laser that produces as much as 1 MJ at a high repetition rate of 10 Hz. In its announcement, this week, Hamamatsu commented, “We believe that establishing this technology is an important milestone, which will help us move toward this goal.”

The results of the study are being presented this week at a symposium and general lecture at the 43rd Annual Meeting of the Laser Society of Japan, taking place at WINC AICHI (Nakamura-ku, Nagoya, Japan) from the 18th to the 20th January, 2023.

Practical laser fusion requires pulsed lasers with energy as high as 1 MJ to irradiate the fusion fuel at a high repetition rate of 10 Hz. To accomplish this goal, Hamamatsu is working to develop high-energy, high-repetition-rate pulsed laser systems using laser amplifiers in which the laser medium is pumped by laser diode modules and efficiently cooled by helium gas.

In 2021, in collaboration with Japan’s New Energy and Industrial Technology Development Organization (NEDO), which is Japan’s national research and development agency, the company in 2021 developed a pulsed laser system that produces 250 joule laser pulses at 0.2 Hz with an average output power of 50 W – which is the world’s highest energy level among LD-pumped lasers.

Since then, the aim has been to increase the repetition rate. However, increasing the repetition rate also raises the temperature of the laser medium and degrades its optical characteristics. To cope with this situation, Hamamatsu improved the cooling mechanism for the laser medium to increase the flow of helium gas and in this way enhance the cooling capacity.

The company stated, “We also optimized the output of the pumping LD modules to prevent the temperature of the laser medium from rising. This resulted in minimal deterioration of laser medium characteristics and successful output of a 100 J pulsed laser at 10 Hz with an average output power of 1 kW.

Results of this study confirmed the possibility of increasing the average output power by scaling up the laser system, and so helped us move forward to establish a technology to produce laser pulses of 1 kJ at 10 Hz. These results are also expected to contribute to new research in the field of basic science.

Hamamatsu plans to continue research and development to establish a technology to produce laser pulses of 250 J at 10 Hz. p>

Two methods have been proposed to make nuclear fusion practical. One method utilizes confined magnetic fields and the other utilizes lasers. The method using lasers is considered more likely than the method utilizing magnetic fields to create a more compact fusion reactor and has been the subject of intense research and development efforts since the 1970s, mainly in the United States, Japan, and Europe.

In major laser fusion research facilities throughout the world, large-scale demonstration experiments are being conducted using large-scale flashlamp-pumped laser equipment in order to achieve high gain for boosting the output energy to about 100 times the input energy.

However, the number of laser irradiations is limited to several times a day due to the time needed to cool the laser medium. Current reasoning is that fusion reactions must take place at high repetition rates and the generated energy must be extracted continuously in order to make laser fusion practical. Hamamatsu says its aim is to establish a technology to irradiate fusion fuel with a 1 MJ pulsed laser at 10 Hz.