Development by University of Bath physicists should protect data communications, even when fiber is twisted or bent. 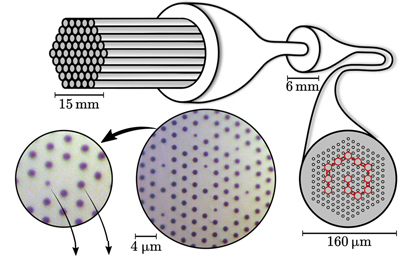 Topological states: glass capillaries are formed into canes and then fiber. Click to expand.

Physicists at the University of Bath, UK, have developed a new kind of optical fiber designed to enhance the robustness of communications networks. They say that this robustness “could prove to be especially important in the coming age of quantum networks”.

The team has fabricated optical fibers using the mathematics of topology. The modified fibers are easily scalable, meaning the structure of each fiber can be preserved over thousands of kilometers. The development and design is described in the latest issue of Science Advances.

During optical transmission (usually by a laser or light-emitting diode) distortions in a fiber can cause the information to degrade as it moves between sender and receiver. “The challenge was to build a network that takes robustness into account,” said Physics PhD student Nathan Roberts, who led the research.

“Whenever you fabricate a fiber-optic cable, small variations in the physical structure of the fibre are inevitably present. When deployed in a network, the fiber can also get twisted and bent. One way to counter these variations and defects is to ensure the fiber design process includes a real focus on robustness. This is where we found the ideas of topology useful.”

The novel fiber deploys topological ideas by including several light-guiding cores in a fiber, linked together in a spiral. Light can “hop” between these cores but becomes trapped within the edge thanks to the topological design. These edge states are protected against disorder in the structure.

Bath physicist Dr Anton Souslov, who co-authored the study as theory lead, said, “Using our fiber, light is less influenced by environmental disorder than it would be in an equivalent system lacking topological design. By adopting optical fibres with topological design, researchers will have the tools to pre-empt and forestall signal-degrading effects by building inherently robust photonic systems.”

Bath physicist Dr Peter Mosley, who co-authored the study as experimental lead, said: “Previously, scientists have applied the complex mathematics of topology to light, but here at Bath we have lots of experience physically making optical fiber, so we put the mathematics together with our expertise to create topological fiber.

The team is now looking for industry partners to develop their concept further. “We are really keen to help people build robust communication networks and we're ready for the next phase of this work,” said Dr Souslov.

Roberts added, “We have shown that you can make kilometers of topological fiber wound around a spool. We envision a quantum internet where information will be transmitted robustly across continents using topological principles. Understanding how to engineer optical fiber has led to light sources from bright supercontinuum that spans the entire visible spectrum right down to quantum light sources that produce individual photons – single particles of light.”