LLNL researchers create more energy from fusion than is needed to drive it, promising cleaner power and nuclear weapons stewardship. 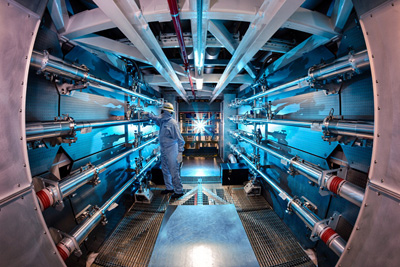 NIF’s preamplifiers boost laser beam energy on the way to the target chamber.

The U.S. Department of Energy (DOE) and DOE’s National Nuclear Security Administration (NNSA) today announced the achievement of fusion ignition at Lawrence Livermore National Laboratory (LLNL) — a major scientific breakthrough decades in the making that will pave the way for advancements in national defense and the future of clean power.

On December 5, a team at LLNL’s National Ignition Facility (NIF) conducted the first controlled fusion experiment in history to reach this milestone, also known as “scientific energy breakeven”, meaning it produced more energy from fusion than the laser energy used to drive it.

This achievement will provide unprecedented capability to support NNSA’s Stockpile Stewardship Program and will provide invaluable insights into the prospects of clean fusion energy, which would be a game-changer for efforts to achieve President Biden’s goal of a net-zero carbon economy, the DOE statement said.

U.S. Secretary of Energy Jennifer M. Granholm told the Washington press conference, “This is a landmark achievement for the researchers and staff at the National Ignition Facility who have dedicated their careers to seeing fusion ignition become a reality, and this milestone will undoubtedly spark even more discovery.”

Granholm added, “The Biden-Harris Administration is committed to supporting our world-class scientists—like the team at NIF—whose work will help us solve humanity’s most complex and pressing problems, like providing clean power to combat climate change and maintaining a nuclear deterrent without nuclear testing.”

“We have had a theoretical understanding of fusion for over a century, but the journey from knowing to doing can be long and arduous. Today’s milestone shows what we can do with perseverance,” said Dr. Arati Prabhakar, the President’s Chief Advisor for Science and Technology and Director of the White House Office of Science and Technology Policy. 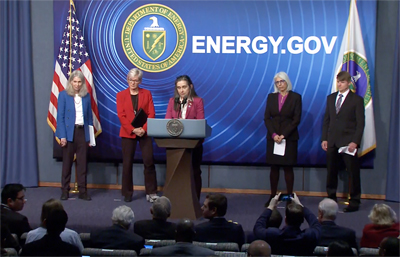 NNSA Administrator Jill Hruby said, “Monday, December 5, 2022, was a historic day in science thanks to the incredible people at Livermore Lab and the National Ignition Facility. In making this breakthrough, they have opened a new chapter in NNSA’s Stockpile Stewardship Program.”

And LLNL Director Dr. Kim Budil said, “The pursuit of fusion ignition in the laboratory is one of the most significant scientific challenges ever tackled by humanity, and achieving it is a triumph of science, engineering, and most of all, people.”

“Crossing this threshold is the vision that has driven 60 years of dedicated pursuit—a continual process of learning, building, expanding knowledge and capability, and then finding ways to overcome the new challenges that emerged. These are the problems that the U.S. national laboratories were created to solve,” Dr. Budil added.

“This astonishing scientific advance puts us on the precipice of a future no longer reliant on fossil fuels but instead powered by new clean fusion energy,” said U.S. Senate Majority Leader Charles Schumer.

U.S. Senator Dianne Feinstein (CA), said, “After more than a decade of scientific and technical innovation, I congratulate the team at Lawrence Livermore National Laboratory and the National Ignition Facility for their historic accomplishment. This is an exciting step in fusion and everyone at Lawrence Livermore and NIF should be proud of this milestone achievement.” 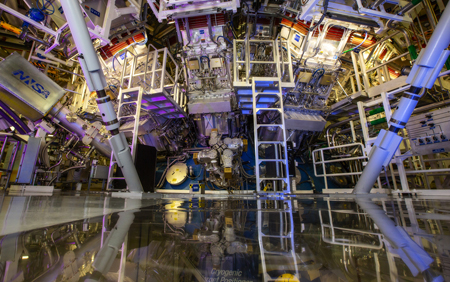 NIF’s target chamber is where the magic happens.

LLNL’s experiment, last week, surpassed the fusion threshold by delivering 2.05 megajoules (MJ) of energy to the target, resulting in 3.15 MJ of fusion energy output, demonstrating for the first time a most fundamental science basis for inertial fusion energy (IFE).

Many advanced science and technology developments are still needed to achieve simple, affordable IFE to power homes and businesses, and DOE is currently restarting a broad-based, coordinated IFE program in the United States. Combined with private-sector investment, there is a lot of momentum to drive rapid progress toward fusion commercialization.

Fusion is the process by which two light nuclei combine to form a single heavier nucleus, releasing a large amount of energy. In the 1960s, a group of pioneering scientists at LLNL hypothesized that lasers could be used to induce fusion in a laboratory setting.

Led by physicist John Nuckolls, who later served as LLNL director from 1988 to 1994, this revolutionary idea became inertial confinement fusion, kicking off more than 60 years of research and development in lasers, optics, diagnostics, target fabrication, computer modeling and simulation, and experimental design.

To pursue this concept, LLNL built a series of increasingly powerful laser systems, leading to the creation of NIF, the world’s largest and most energetic laser system. NIF—located at LLNL in Livermore, Calif.—is the size of a sports stadium and uses powerful laser beams to create temperatures and pressures like those in the cores of stars and giant planets, and inside exploding nuclear weapons.

The following US DOE video shows the moment of announcement of the fusion achievement and a panel discussion with senior members of the US Administration and key scientists from Lawrence Livermore National Laboratory and the National Ignition Facility, which took place today (13 December, 2022) in Washington, DC.