LiFi, color-changing cars and lidar light up CES 2022 in Vegas 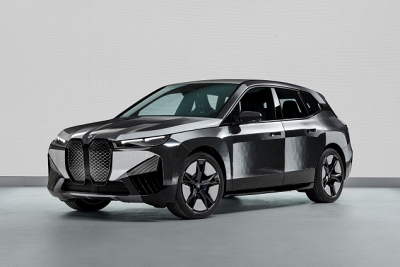 Optics-inspired innovation has once again made an impact at the Consumer Electronics Show (CES 2022) in Las Vegas, with automotive lidar to the fore. Here’s our round-up of some notable announcements from the Las Vegas event:

According to the Californian firm, its demonstration of a data rate in excess of 90 Gb/s is more than 100 times faster than a 5G link.

The high-speed links are based around KSLD’s “LaserLight” emitters, which operate in both the visible and infrared regions of the spectrum. The same sources can be used for night vision, optical power transmission, lidar, and dynamic lighting applications, states the firm.

• Digital paper pioneer E Ink, which spun out of MIT’s Media Lab back in 1997 but is now headquartered in Taiwan, has teamed up with auto giant BMW to create a color-changing concept car (see image, above).

The “iX Flow” vehicle uses E Ink’s programmable “Prism” optical films to alter reflectivity, and switch the car’s appearance between white and black. According to E Ink, the films comprise millions of tiny microcapsules filled with white and black pigments that can be moved up or down using an electric field.

The E Ink material is bistable – meaning that power is only needed to switch color, not to maintain it. The company suggests that as well as enabling vehicle personalization, the technology can help maximize efficiency by using a white exterior on hot days to reflect sunlight, and switching to a black exterior to absorb heat on cold days.

“Because E Ink is incredibly low power and durable, we can put our display technology on almost any surface, transforming a once static space into something dynamic and spectacular - and sustainable,” stated the firm.

The new SUV, slated to appear some time this year, will represent the first introduction of Volvo’s “Ride Pilot” feature, described as “an unsupervised autonomous driving capability for highways”.

The plan is to launch the vehicle in California initially, although that remains subject to safety verification by the state. For the verification process, Volvo has applied for a testing permit with the California Department of Transportation and intends to begin testing on highways in the middle of the year.

Luminar founder and CEO Austin Russell said: “With Luminar as standard on every vehicle, [Volvo’s] next SUV has the opportunity to be the safest vehicle ever produced, while also being the first to enable true autonomy and at highway speed.”

Here we go #CES2022. Visit us at booth #5543 West Hall; see live demos of lidar-powered Proactive Safety™ on our outdoor test track and tune in for our $LAZR news conference with @volvocars and @zenseact starting at 10:15amPT here: https://t.co/qmlwfsTRqv. pic.twitter.com/LFsAXU681r

The demo included detection and tracking of a target with 10 per cent reflectivity mounted on a vehicle stationed 200 meters away, and a person wearing dark clothes who approached the vehicle from that distance.

Quanergy co-founder and chief development officer Tianyue Yu added that the OPA offered “highest reliability” with no moving parts, alongside adaptive zoom to focus on any obstacle, and active scanning to enable steering capability and flexibility to collect a point cloud in any pattern.

“These attributes provide for high-volume, high-yield, low-cost manufacturing,” Yu said. Quanergy is the latest of several lidar companies to seek finance through a stock market listing, and expects to close its special-purpose acquisitions company (SPAC) merger deal with CITIC Capital Acquisition Corporation by the end of March 2022.

Said to offer 360x64-degree coverage, 0.05x0.05-degree resolution, up to 1280 scanning lines, plus a range of 300 meters, the sensor will be aimed at deployments in robotaxis, shuttles, and autonomous trucks, alongside non-automotive applications.

That could include logistics, mapping, and smart infrastructure uses, with Innoviz saying that it expects to begin sampling the product by the end of this year, and for it to begin generating revenues from 2023.

The Innoviz360 is said to be compatible with systems including Nvidia’s “Drive”, a development platform and reference architecture for designing and deploying autonomous vehicles.