Mszczonów site to be one of the largest optical fiber manufacturers in EU, to open in 2022. 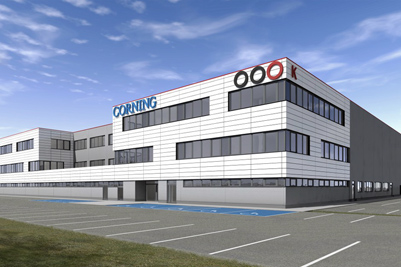 Corning's new facility will be one of the largest fiber makers in the EU.

The new facility, which will be one of the largest optical fiber manufacturing plants in the European Union, is expected to open in 2022 to meet growing demand for optical fiber.

“Demand on the network is at an all-time high. Along with a global surge in data traffic, users are requiring higher-performance connections,” said Dr. Bernhard Deutsch, vice president and general manager, Corning Optical Fiber and Cable.

“Bandwidth demand in Europe and the surrounding regions continues to increase, notably through investments in 4G densification, 5G, fiber to the home, and data center networks.”

Corning’s Optical Communications manufacturing operations in Poland date back to 2001, when the company opened a plant in Łódź (Stryków).

“This investment underscores Corning’s commitment to support the growth plans of our customers in the region, ensuring a reliable supply of optical fiber,” added Dr. Deutsch.

“We are pleased to build on our two decades of successful operations in Poland, which would not be possible without the continued support of both regional and state governments in Poland,” said Deutsch.

“Corning is one of the world’s leading innovators. We are pleased the company has selected Mszczonów for its optical fiber manufacturing facility,” said Józef Kurek, mayor of Mszczonów. “This investment speaks volumes to the talents of our local workforce.”

Earlier in April, Corning announced the next phase in its long-term relationship with Samsung Display. Samsung Display has been an investor in Corning since 2014, when it received preferred shares – convertible after seven years and equivalent to an approximately 7.5% ownership stake – as part of a series of strategic and financial agreements that resulted in Corning acquiring full ownership of Samsung Corning Precision Materials.

Following the seven-year anniversary of the agreements, and with the Corning common dividend exceeding the preferred dividend, Samsung Display will convert all of its preferred shares to common, which represents approximately 13% of Corning’s common shares on an as-converted basis.