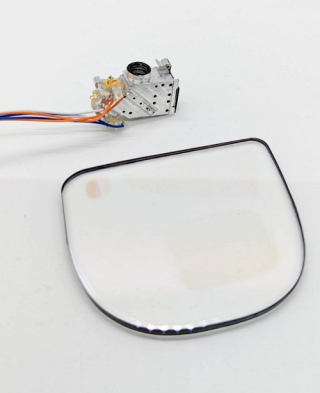 Corning has become the latest blue-chip firm to invest in DigiLens, the Silicon Valley company developing holographic waveguides based on Bragg gratings.

NYSE-listed Corning, ranked high among the world’s largest glass producers, joined Samsung and the venture wings of Mitsubishi Chemical and Universal Display Corporation in support of DigiLens’ series D round now said to have raised more than $50 million.

In previous funding rounds DigiLens has garnered support from the likes of Sony, Panasonic, Foxconn, and auto parts giant Continental.

The company says that the latest injection of cash will be used to strengthen its licensing business model for deploying the waveguides in augmented, virtual, and mixed reality (AR/VR/MR) smart glasses - seen by some as the next major step in the evolution of computing and mobile devices.

“This series D round demonstrates our strong strategic foundation in the emerging XR [extended reality] sector. Our diverse set of partners from multiple different industries and backgrounds is taking another step to separate DigiLens from everyone else.”

Pickett adds that the company is currently working on projects featuring its volume Bragg grating technology that will appear in the market over the next 12 months.

“These advances will showcase that we’re the only solution that is going to work when efficiency, uniformity and cost are considered,” he added. “Then, with our next-generation technology, we’ll have a step function in performance that will extend our lead even more.”

That waveguide technology is touted as offering a significant gain in performance while enabling an even lower cost point.

“It represents a breakthrough in diffractive grating technology, effectively broadening the design space that dictates how the technology can be used for near-to-eye displays,” explains DigiLens.

“The novel surface relief structures themselves have no residual bias layer between the gratings and the supporting substrate and are made up of a strong polymer instead of a messy resin.”

Crucially, the grating structures are said to be simple to manufacture with the firm’s existing holographic recording process, allowing them to be slanted easily to suit a broad range of requirements while generating high-contrast images.

Larger field of view
DigiLens also says that, compared to traditional surface relief gratings, its new approach does not limit the range of height-to-width aspect ratios - something that should lend flexibility to both fabrication and design challenges.

The result should be much larger fields of view through a waveguide, or a reduction in the number of substrates needed to create a full-color waveguide lens.

Although smart glasses have yet to take off in a major way, DigiLens sees “extended reality” - a blanket term covering AR/VR/MR - as the next evolutionary step in computing from laptops, tablets, and smart phones.

“DigiLens’ volume Bragg gratings are positioned to become the de facto optical standard for smart glass experiences because its technology is four times better than the closest competitor for eye glow and provides the best balance of thin, lightweight, high-performance, low cost, and highly manufacturable waveguide displays for all types of XR devices,” boasts the firm.

Alistair Grant, its SVP of optical engineering, added: “With our volume Bragg gratings, DigiLens has a scalable and cost-effective optics offering ready today, and with the promise we have seen with our next-generation waveguide technologies we’re set to provide the needed wide field of view and thin optical solutions of tomorrow.

“With partners like Corning for glass substrates and Mitsubishi Chemical for plastic substrates, OEMs in the personal computing industry now have the ability to create smart glasses tailored for enterprise, government, and consumer use cases.”

News of the Corning investment follows the launch of DigiLens’ second-generation waveguide at the Consumer Electronics Show (CES) in January.

The new “Crystal30” waveguide is described as the most efficient diffractive waveguide currently on the market, and compatible with both indoor and bright-light outdoor environments.