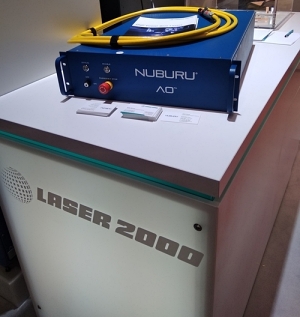 Nuburu, the US firm that has pioneered the development of blue diode lasers for industrial applications, is looking to raise upwards of $330 million via a special-purpose acquisitions company (SPAC) listing.

The Colorado-based operation, which was co-founded by former Coherent executives Mark Zediker and Jean-Michel Pelaprat in 2015, has agreed a deal with investment vehicle Tailwind that values Nuburu at $350 million.

That is the same valuation arrived at earlier this year, after the company closed a $15.5 million round of venture finance. Nuburu had previously attracted $20 million in its series B round, in December 2020.

News of the SPAC deal comes as Zediker and his colleagues look to accelerate the commercialization of Nuburu’s blue diode laser systems, with several new products slated to launch over the next few quarters.

Ability to scale
In a message to shareholders and potential customers dated August 8, Zediker suggested that the Tailwind agreement should raise gross proceeds of as much as $334 million.

“We expect to also have access to additional financing following closing to fund our growth initiatives through a funding agreement with Lincoln Park Capital for up to an aggregate of $100 million, subject to the conditions set forth in the purchase agreement,” wrote the CEO.

Zediker added that the deal should be completed in early 2023, assuming that it is given the go-ahead by Nuburu and Tailwind stockholders. If successful, it will see Nuburu listed as a publicly traded company under the new ticker symbol “BURU”.

“After considering all of these avenues, we chose to pursue a SPAC process because it allows us to raise a substantial amount of capital quickly while fast tracking the path to being a public company and giving existing stockholders a clear path to achieve liquidity if you so desire.

“The proposed transaction will significantly enhance our ability to scale our technology and operations, and accelerate our growth.”

Kilowatt blue power
Nuburu is virtually unique in its focus on developing blue lasers for materials processing, an application area that has until recently relied almost entirely on carbon dioxide, solid-state, and fiber lasers emitting in the infrared.

However, the shorter wavelength offers a much better absorption match for welding and 3D printing certain materials - meaning faster welding, especially for colored metals like copper and gold, and alloys containing those metals.

The past few years have seen Nuburu ramp up the output power of its systems, with the company revealing a kilowatt-level blue diode laser at the LASER World of Photonics event in 2019.

Speaking in a panel session at the same event Pelaprat explained that Nuburu was using single-emitter diodes instead of diode bars, so that the systems could deliver considerably better brightness – a critical advantage when it comes to welding applications.

“We get much better collimation of every single diode,” said Pelaprat, in comparison to the bar-based alternative design, which he said would suffer from variability in the pointing direction of the joined emitters.

Nuburu’s 500 W design was based on four “core” 150 W diode engines, combined using a series of interleaving mirrors. Pelaprat cited good long-term stability as another key attribute, and pointed out that because the more energetic blue photons are able to perform welding more quickly than infrared ones, a blue system ought to end up completing many more processes over its lifetime.

The US firm’s research team has also developed a proprietary lens optic, designed to optimize welding with the blue source by producing a high-quality beam capable of high-precision welding of copper foils typically found in lithium ion batteries, and hairpin components used in electric motors.

But in the longer term it is 3D printing that is expected to prove the most lucrative field, and to account for two-thirds of a $15 billion total addressable market by 2032. Key advantages here are said to be faster production, and the ability to 3D-print much larger metal components than is currently possible.

The investor presentation also reveals that, as of June 2022, the company had sold only 36 of its systems (to 26 different customers), although that is expected to increase thanks to long-term development deals with additive manufacturing systems firm Essentium, and the US Air Force's technology transfer unit AFWERX.

And the same document outlines a product roadmap indicating the production release of new and more powerful welding systems based around additional light modules throughout 2023.

For welding applications, that is expected to include models targeting bus-bars and EV batteries with as many as 16 combined light modules. Products aimed specifically at 3D printing applications are also in the pipeline.

Zediker said in a release announcing the SPAC: “Looking ahead, we are focused on growing our customer base, expanding our distribution channels, accelerating development of our ultra-high brightness product family and scaling our manufacturing operations to meet demand globally.”

“Mark is a visionary CEO who is pioneering innovation to expand Nuburu’s transformative laser technology for a broad, leading-edge range of applications and industries.”