Nuburu raises $20M in series B round

Developer of blue industrial lasers to beef up its presence in markets including 3D printing and electric vehicles. 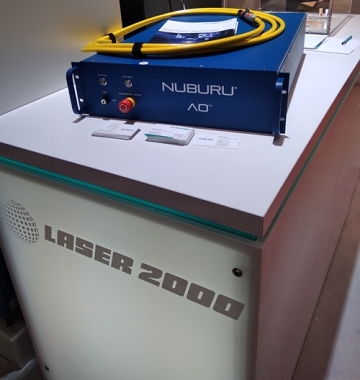 Nuburu, the Colorado-based startup that specializes in high-power blue lasers for materials processing applications, says it has completed a $20 million round of venture funding.

The firm, which last month appointed a new CEO and CFO, says that the series B funding will help accelerate development of its 1.5 kW, 445 nm “AI” welding system - as well as support a growing presence in key markets including 3D printing and energy storage.

Led by existing investor Anzu Partners and Thomas Wilson - CEO of NYSE-listed insurance giant The Allstate Firm - the latest round is said to bring Nuburu’s total funding to date to nearly $50 milion.

Single emitters for better brightness
Founded in 2015 by former Nuvonyx chief Mark Zediker and Jean-Michel Pelaprat, previously Novalux CEO, Nuburu’s focus on high-brightness blue lasers is based on the physics of absorption.

All metals, but particularly darker-colored metals like copper and gold, have a much higher absorption in the blue part of the spectrum than they do in the near-infrared.

That key property means that blue sources offer an advantage over traditional solid-state lasers emitting at around 1 µm, especially when it comes to welding applications - essentially meaning that parts can be welded faster.

At a panel session during last year’s LASER World of Photonics event in Munich, Pelaprat explained that the Nuburu systems were based around single-emitter diodes, unlike rival approaches using diode bars, to deliver a higher brightness.

Brightness is another critical property when it comes to welding, and is helped by the better beam collimation possible with single emitters.

At the Munich event, Nuburu showed off a 500 W design based on four “core” 150 W diode engines, combined using a series of interleaving mirrors.

The company has also developed its own lens optic, designed to optimize welding with the blue source by producing a high-quality beam. Showing a series of spatter-free results from copper and gold welding applications, Pelaprat said that the system had produced “superb welds” of copper foils typically found in lithium ion batteries, and hairpin components used in electric motors – as well as completing processes that are simply not possible with infrared lasers.

Scaling up operations
On its web site, Nuburu explains that overall beam quality is optimized by first circularizing and collimating the individual diode outputs, using actively aligned micro-optics for each emitter.

The individual beamlets are then combined, preserving the all-important beam-parameter product (BPP), a specification that indicates how “spread out” a beam of light is.

With a diode bar, angular divergence tends to dominate the BPP, which Nuburu says cannot then be recovered. “Larger BPP means [lower] brightness, and that leads to lower power density and consequently longer processing times,” it states.

Maintaining a smaller BPP, and a tighter beam spread, ultimately means faster welding, and a deeper weld penetration, if that is desired.

“This new funding allows us to advance our Denver-based automated production facility and accelerate development of our ultra-high-brightness product family.”

Co-founder Zediker added: “The feedback we’ve received from our customers has been overwhelmingly positive, and proved that our high-power and high-brightness blue lasers are a compelling option for processing aluminum, brass, gold, and other challenging metals.

“We are now scaling operations to respond to this strong customer interest in migrating their processes to our blue laser technology.”