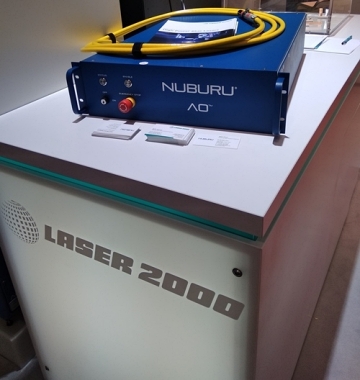 Nuburu, the Colorado-based company that has pioneered the development of industrial lasers emitting in the blue, says it has raised additional capital, meaning that it is now valued at $350 million.

Although the firm did not disclose exactly how much more money has been raised - and is yet to file a US Securities & Exchange Commission (SEC) detailing any new funding - it said that existing investors Anzu Partners, Grapha Holdings, and Thomas Wilson participated in the latest round.

The additional cash will be used to expand Nuburu’s presence across target markets, including automotive, aerospace, consumer electronics, and defense.

Absorption boost in the blue
Founded in 2015 by former Nuvonyx boss Mark Zediker and Jean-Michel Pelaprat, previously a general manager at Coherent, Nuburu’s approach is based around the fact that metals have a higher absorption in the blue portion of the spectrum than in the near-infrared region where industrial fiber lasers typically emit.

The higher absorption is particularly evident in metals such as gold and copper, with the latter becoming highly significant in recent years for welding batteries found in electric vehicles.

However, it is only relatively recently that blue diode emitters have reached the kind of output powers and brightnesses that are needed for such demanding industrial materials processing applications.

Nuburu’s systems have typically been based around single-emitter chips producing light at 450 nm, while Germany’s Laserline has worked closely with laser diode developers at Osram Opto Semiconductors on a powerful bar design that mimics more conventional diode lasers operating in the near-infrared region.

The single-emitter approach better preserves the so-called “beam-parameter product” - a measure of the extent to which a beam spreads out - ultimately leading to faster welding, and a deeper weld penetration, Nuburu says.

In December 2020, the company revealed that it had raised $20 million in venture finance in a round led by Anzu and Wilson, who is the CEO of NYSE-listed insurance company The Allstate Firm.

Executive appointments
As well as the new funding, Nuburu has appointed two new senior managers. Brian Faircloth, who has joined the firm as its new COO, previously held senior positions at both Coherent and Nuvonyx, and was most recently CTO at engineering firm ForoEnergy.

“Nuburu’s blue laser technology brings improvements in metal processing, unlocking critical advantages to manufacturers across industries,” said Faircloth. “I am thrilled to be joining the team during this period of growth and look forward to using my industry expertise to further commercialize this technology.”

Meanwhile, Andrew Dodd has been promoted to VP of global sales, with the job of boosting commercialization efforts for Nuburu’s lasers. He previously worked at industrial laser firm GSI Lumonics, before joining Nuburu in 2019.

Commenting on the various developments, CEO Zediker said: “As electrification and advances in manufacturing drive growth in our target markets, this capital infusion, appointment of Mr. Faircloth as COO and Mr. Dodd’s promotion to VP of Global Sales ensures continued momentum for Nuburu.

“Looking ahead, we are focused on growing our customer base, expanding our distribution channels, accelerating development of our ultra-high brightness product family, and scaling our manufacturing operations to meet demand globally.”

According to the firm's web site, Nuburu is due to launch a new 1.2 kilowatt laser at some point this year. The "AI Series", which will also feature a 300W laser, is set to be aimed at welding spatter- and defect-free copper up to 1.5mm thick, as well as steel and aluminum.