Latest mirror alignment steps completed, with all optical parameters said to be performing 'at or above' expectations. 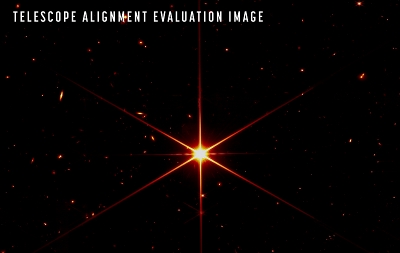 The optical system on board the James Webb Space Telescope (JWST) has completed its latest critical alignment steps, with NASA saying it now expects the observatory’s optical performance to meet or even exceed science goals.

Known as “fine phasing”, the alignment that has taken place over the past couple of weeks brought the image of an individual star into sharp focus on JWST’s NIRCam detector.

However, the image of that star released by NASA also shows the sensitivity of the imaging optics, with several galaxies clearly visible in the same part of the sky.

“At this key stage in the commissioning of Webb’s Optical Telescope Element, every optical parameter that has been checked and tested is performing at, or above, expectations,” announced the agency - noting that the observed optical performance looked even better than its models had predicted.

“The team also found no critical issues and no measurable contamination or blockages to Webb’s optical path,” added NASA. “The observatory is able to successfully gather light from distant objects and deliver it to its instruments without issue.”

Audacious optics
Although the NIRCam primary imager is now fully aligned with the optical system, a number of steps still need to be completed before JWST and its scientific instruments are ready to produce their first real data.

Over the next six weeks, the team will further align the telescope to include the Near-Infrared Spectrograph, Mid-Infrared Instrument, and Near InfraRed Imager and Slitless Spectrograph.

After any final alignment adjustments are made, the four instruments will spend another couple of months cooling and being prepared to produce initial scientific imagery - likely in late June or early July.

But at this stage it appears clear that the $10 billion mission, with its first-of-a-kind optical system based on 18 primary mirror segments, is performing as well as anybody could have expected.

Thomas Zurbuchen, associate administrator for NASA’s Science Mission Directorate, said: “More than 20 years ago, the Webb team set out to build the most powerful telescope that anyone has ever put in space and came up with an audacious optical design to meet demanding science goals.

“Today we can say that design is going to deliver.”

Diffraction-limited imagery
And in a video posted by NASA (see below), Scott Acton, wavefront sensing and controls scientist on the mission, said:

“We got together and looked at the very first diffraction-limited images that came out of the Webb telescope. And what we saw is that we have the highest resolution infrared images taken from space…ever.”

The image released by NASA shows the result of the “fine phasing” stage, with a star at the center of the field of view captured by the JWST optics and the NIRCam detector.

“The purpose of this image was to focus on the bright star at the center for alignment evaluation, [but] Webb's optics and NIRCam are so sensitive that the galaxies and stars seen in the background show up,” said the agency.

“There’s only one thing left to do,” added Acton. “And that’s to see how well the telescope is aligned with the other science instruments.

“I cannot wait to see what it discovers.”