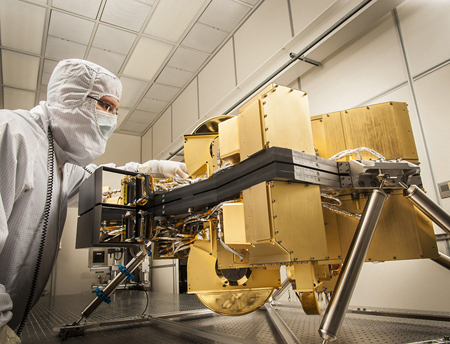 So near, going so far: The Near-Infrared Camera for NASA's James Webb Space Telescope

Lockheed Martin, Palo, Alto, Ca, US, has completed assembly and testing of a near infrared camera (NIRCam), under a contract from the University of Arizona. The instrument, which has been delivered to the NASA Goddard Space Flight Center in Greenbelt, Md., is the prime near-infrared imaging instrument for the James Webb Space Telescope, NASA's next-generation space observatory and successor to the Hubble Space Telescope.

The most powerful space telescope ever built, JWST is scheduled to observe the most distant objects in the universe, provide images of the first galaxies ever formed and help explore planets around distant stars. The Webb telescope is a joint project of NASA, the European Space Agency, and the Canadian Space Agency.

The University of Arizona and Lockheed Martin are responsible for the NIRCam instrument design, including optical, mechanical, structural, thermal, electronic, precision mechanisms and control software, as well as the instrument control and focal plane electronics and software. Besides Lockheed Martin and the University of Arizona, the NIRCam team comprises Teledyne Imaging Sensors of Camarillo, Ca, and a team of scientific co-investigators.

“It is very satisfying to have completed this magnificent astrophysical instrument,” said Jeff Vanden Beukel, Lockheed Martin NIRCam program director at the Advanced Technology Center. “We look forward to the day when our engineering and manufacturing efforts will help produce discoveries yielding a greater understanding of the Universe.”

NIRCam is equipped with coronagraphs, which will allow astronomers to image very faint objects around a central bright object, like planets around distant stars. The coronagraphs work by blocking a brighter object's light, making it possible to view the dimmer object nearby. the camera also functions as a wavefront sensor responsible for keeping the telescope mirrors in phase and focused for all the other science instruments.