Third of seven phases of optics tweaking now completed, with coarse phasing the next step.

NASA says that it has successfully completed the latest stages of its three-month process for aligning the mirrors of the James Webb Space Telescope (JWST).

Launched on Christmas Day 2021, JWST reached its Lagrange point destination at the end of January, with the seven-step alignment phase starting last month after the telescope captured its first starlight at the beginning of February.

Having now completed the latest phases, known as segment alignment and image stacking, the JWST team will begin making smaller adjustments to mirror positions, and begin the next stage, “coarse phasing”, to sharpen up captured images. 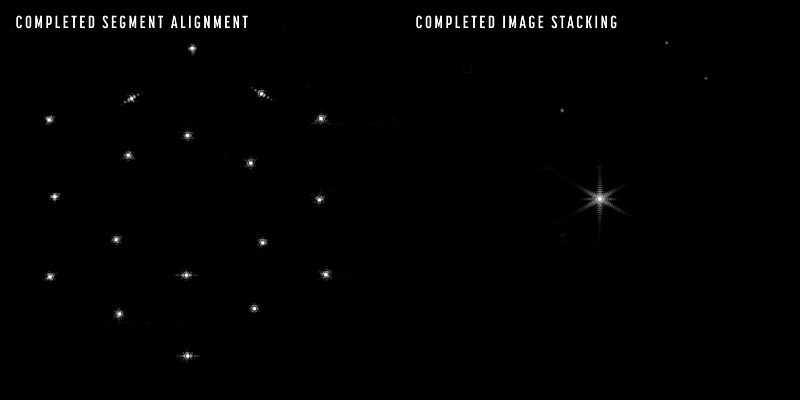 Overlapping dots
For the “segment alignment” stage, the JWST optics team moved what were 18 scattered dots of starlight (captured by each of JWST’s individual primary mirror segments) into the familiar hexagonal formation, and then refined each segment’s image by making minor adjustments.

NASA says that this phase, which included a tweak to the alignment of the secondary mirror, was a key step to complete prior to overlapping light from each of the individual mirrors to create a single image.

Once the segments were aligned correctly, the focused dots reflected by the 18 mirrors were stacked on top of each other, directing photons from each segment to the same location on JWST’s NIRCam detector, which is acting as the telescope's wavefront sensor.

During the “image stacking” process, the team activated sets of six mirrors at a time and commanded them to repoint, until light from each of the 18 segments overlapped - meaning that the 18 mirrors can now work in unison.

Lee Feinberg, NASA’s optical telescope element manager for JWST, said: “We still have work to do, but we are increasingly pleased with the results we’re seeing. Years of planning and testing are paying dividends, and the team could not be more excited to see what the next few weeks and months bring.”

Coarse phasing
The agency’s latest blog post points out that although completion of the image stacking stage means that all the light from an imaged star now arrives in a single location on NIRCam’s detector, the mirror segments are still acting like 18 small telescopes, rather than one large one.

“The segments now need to be lined up to each other with an accuracy smaller than the wavelength of the light,” explains the team, adding that the coarse phasing stage will see NIRCam capture spectra from 20 separate pairings of mirror segments.

“This helps the team identify and correct vertical displacement between the mirror segments, or small differences in their heights. This will make the single dot of starlight progressively sharper and more focused in the coming weeks.”

Following the coarse phasing stage, the optical system will be further refined through fine phasing, alignment over the field of view of each instrument, and final corrections.

With each of the instruments also cooling steadily before commissioning, the first scientific images from JWST are expected some time in the summer.

SPHEREx mission readied for 2024-5
• Meanwhile Ball Aerospace, the US company that designed and built the JWST mirror system, says it is ready to move forward and build an all-sky infrared spectrophotometer for NASA.

The “Spectro-Photometer for the History of the Universe, Epoch of Reionization and Ices Explorer” (SPHEREx) satellite mission is intended to generate maps of the entire sky that should help cosmologists seeking to establish how galaxies formed during the early universe.

“Ball will now move forward with building the telescope and spacecraft,” said the firm, following completion of a mission-level critical design review. The mission is currently scheduled to launch between June 2024 and April 2025.

Described as the first ever all-sky near-infrared spectral survey, SPHEREx will produce four complete all-sky maps during its two-year mission, providing new insight into the nature of the physics that drove cosmic inflation in the early universe.