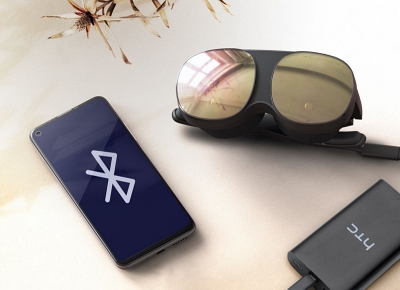 Innovative new optical components based on “birdbath”, holographic, and dynamic focus tuning effects are being tipped to replace Fresnel lenses in extended reality (XR) headset designs over the coming decade.

That is one of the conclusions from a new report released by the technology-focused market research company IDTechEx, which also predicts that the market for optics used in augmented, virtual, and mixed (AR/VR/MR) headsets and eyewear will grow rapidly over the next decade.

Currently, the vast majority of VR headsets use relatively inexpensive Fresnel lenses to magnify images and bring them into focus. But although cheap and lightweight, these designs produce a number of optical artifacts that compromise the quality and comfort of the virtual experience.

Newer optical technologies promise to solve many of these issues, while adding functionality for a more immersive experience and making headsets smaller - but each faces technical challenges of their own.

“Polarization-based pancake lenses saw their first entry into Western headset markets in 2021 with HTC's Vive Flow, with further releases from Shiftall/Panasonic and possibly Meta expected in 2022.” reports the analyst firm.

“These lenses promise more compact designs by folding the optical path, allowing dioptric correction, and are devoid of Fresnel artifacts.”

However, there are some drawbacks with pancake lenses, notably a lower optical efficiency, although IDTechEx points out that later iterations are expected to solve the vergence-accommodation conflict, thus maximizing immersion while eliminating the effect that can cause VR headset wearers to suffer from motion sickness.

Another example of a compact optical design is catadioptric freeform prism lenses, which IDTechEx also tips to make an impact this year.

When it comes to enabling immersive AR/MR, and overlaying a created reality onto the real world, the market research firm believes that a consensus is emerging, and that optical waveguides are making the most headway.

“Surface relief diffractive waveguides, as used in Hololens and Magic Leap devices, have made early strides,” says the firm. “Manufactured via processes inherited from the silicon industry, these enable relatively slim and compact devices but suffer from high costs, image quality issues and poor efficiency.”

Alternatives include holographic diffractive waveguides and reflective waveguides, which IDTechEx says promise to “revolutionize” manufacturability and “redefine” image quality respectively - although these are yet to gain significant market traction. 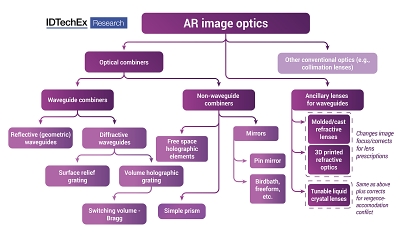 Birdbaths, etendue, and entropy
Other optical combiner possibilities, including so-called “birdbath” and freespace holographic approaches, are candidates for AR/MR headset designs, particularly where cost or compactness are the main priority.

Meanwhile, the report looks at the status of ancillary lenses for waveguides, which can match spectacle prescriptions and also promise to solve the vergence-accommodation conflict.

Key areas of development include maximizing both the field of view (to improve the sense of immersion) and the so-called “eyebox” (for comfort and usability) - although achieving this is very difficult because of the problem of etendue.

“Etendue characterizes how ‘spread out’ the light is in an optical system by area and angle,” explains IDTechEx. “It may be thought of as the result of entropy in optical systems - it is a measure of disorder and it never decreases in a system where optical power is conserved.

“Every time light passes through a real and so imperfect optical element (for example a lens, waveguide or aperture), etendue will grow due to diffraction, aberrations etc.”

“In this case, both exit pupil and image must be magnified - but etendue limits this. Furthermore, expansion of the exit pupil over a greater area results in lower optical efficiency.”

The issue of etendue is regarded as less significant for a VR system, however, because in this case the display and exit pupil are of a relatively similar size, making it easier to maximize the field of view and eyebox.

One long-term prospect for XR devices could be dynamically focus-tunable geometric phase lens arrays, using holography or metasurfaces. Although these are still years from deployment currently, IDTechEx has noted interest and patent activity from the likes of Meta, Valve, and Apple.

“This once-static field has transformed into a hotbed for innovation,” states the report, adding that the market for XR optics will grow at a compound average rate of 24 per cent over the next decade - thus ending up nearly an order of magnitude larger.

• For more details on the IDTechEx report 'Optics for Virtual, Augmented and Mixed Reality 2022-2032: Technologies, Players and Markets', click here.