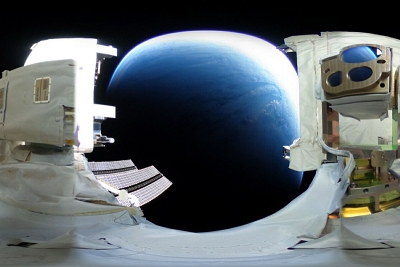 Optical link from ISS to Earth

The move, which comes just a week after fellow Japanese company Mitsubishi Electric revealed that it had combined an optical receiver with spatial laser acquisition capability for the same market, will see Sony working on small optical communications devices to connect micro satellites in low-Earth orbit (LEO) and for ground links.

In a statement, Sony said that by applying the optical disc technology that it has cultivated over several years through the development and production of laser diode systems for CD, DVD, and Blu-ray players, it aimed to realize optical communications devices that were ultra-compact, lightweight, mass producible, and able to withstand the harsh environment of space.

LEO and ground links
Kyohei Iwamoto, president of the new California-based subsidiary, added: “Currently there are approximately 12,000 satellites in space, and the number is expected to increase in the future.

“The amount of data used in orbit is also increasing year by year, but the amount of available radio waves is limited.

“Additionally, the need for frequency licenses for radio waves and the requirement for lower power consumption of communication equipment needed by smaller satellites, like micro satellites, are also issues to be addressed.”

While a number of projects have demonstrated the feasibility of optical links between orbiting spacecraft, establishing a ground link has the additional difficulty of overcoming the distorting effects of the Earth’s atmosphere.

On the other hand, optical links do not require the same licenses as radio communications, making for somewhat easier logistics.

“By providing easy-to-use inter-satellite communications capabilities, SSC aims to increase the amount of communications in space and realize an internet communications network covering the Earth, space, and applications such as real-time services,” Sony said.

SOLISS module
Up until now, the company has been conducting research and development of optical communications systems at its Sony Computer Science Laboratories, Inc. subsidiary, with a view to enabling high-speed data links in a form that can be mounted on micro satellites.

The company references a recent experiment to establish optical links between the International Space Station (ISS) and Earth as evidence of the progress being made.

In 2020, “SOLISS” (Small Optical Link for International Space Station) was installed in the Japanese Experiment Module "Kibo" of the ISS, in collaboration with the Japan Aerospace Exploration Agency (JAXA).

According to NASA, the demonstration module features a unique pointing mechanism containing a 1 kg optical communications unit with a 1550 nm laser and an erbium-doped fiber amplifier producing up to 500 mW output to deliver a 100 Mb/s downlink speed.

“In 2021, this experimental device successfully established optical downlinks from space to a commercial optical ground station of Kongsberg Satellite Services in Greece,” stated the firm.

“In 2022, in collaboration with JAXA, an experiment on complete data file transfer in a simulated error-prone communications environment, which will be the technological basis for Internet services through stratospheric and low-Earth orbit optical communications, was successfully conducted.”