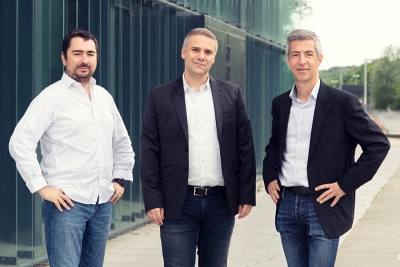 A Belgian startup claiming to have made a breakthrough in extended reality (XR) technology based on diffractive optics has raised €7 million in seed funding.

Swave Photonics, a spin-off from Vrije Universiteit Brussel and imec, says that the support will be used to fund the commercialization of its “truly realistic, immersive” approach, which promises to eliminate the need for large augmented and virtual (AR/VR) headsets, and replace them with ultra-light wearable devices.

“Our vision is to help build the fundamental holographic technology to bring the metaverse to life and work,” said Theodore Marescaux, Swave’s CEO and founder, who has previously worked at both imec and the displays giant Barco.

“True, lifelike and immersive metaverse experiences powered by Swave technology are poised to replace every AR/VR display and headset to the point where virtual, augmented or XR is practically indistinguishable from the real world.”

Dealing with those problems would make it much easier for viewers to focus on both nearby and faraway objects, and reduce the disorientating nature of the AR/VR experience, which causes many users to feel motion sickness.

Earlier this month a report from market analyst IDTechEx suggested that holographic diffractive waveguides could revolutionize the XR market in the future - although it also pointed out that the approach is yet to gain any significant market traction.

Swave, which is following a fabless production model, also points out that its HXR chips are manufactured using conventional CMOS processing, which should enable cost-effective scaling to large volumes.

The firm adds that large versions of the chips (measuring 2 cm x 2 cm) are designed for ultra-high-end holographic display applications, while a smaller design (0.5 cm x 0.5 cm) will be aimed at ultra-light-weight wearable device applications.

“Initial HXR chip samples are planned to be available in 2023,” Swave said. “Future versions of HXR chips will be optimized for additional emerging AR/VR/XR applications.”

The same technology could also be used in holographic headsets that would deliver very immersive 3D AR/VR/XR experiences, thanks to extremely high-resolution imagery, a perfect depth of focus, and unlimited viewing angles - without the problems typically experienced by users of conventional headsets.

“Applications powered by HXR gigapixel technology will be capable of passing the visual Turing test, in which virtual reality is practically indistinguishable from real-world images that humans see with their own eyes,” claims the firm.

Swave also thinks that the technology will play a key role in the future of remote working, by providing much more immersive video conferencing capability than is currently possible.

“Swave plans to partner with leading AR/VR/XR and metaverse platforms, so companies can have a shared, life-like 3D experience of meeting around a conference table,” it stated.

Supporting the seed round were imec’s own “xpand” venture capital fund, alongside the Flanders Future Techfund (FFTF), and QBIC, a Belgian inter-university venture fund.

imec CEO Luc Van den hove said: “We are convinced that Swave can bring to the market a fundamental technology we have been developing for more than five years through substantial R&D programs and imec investments.

“We are committed to make Swave a success and have great confidence that with their extensive patent portfolio and continued support of our teams and ecosystem, [it] can become one of the biggest disruptors for immersive 3D displays and a key accelerator for applications like the metaverse.”

Peter Vanbekbergen, a partner at imec.xpand, added: “We are convinced that Swave’s transformative gigapixel holographic technology can fuel the $93 billion AR/VR, metaverse market and will position Swave to enable an upgrade to today’s challenging AR/VR immersive experiences.”