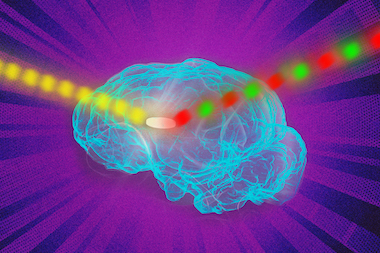 Fluorescence microscopy has ingenious ways to detect the light emitted by marker molecules placed within biological tissues, but the inherent scattering behavior of those tissues and their tendency to autofluoresce is always a hindrance.

A project at MIT has now developed a method to effectively boost the signal strength from fluorescent sensors, potentially allowing them to be implanted deeper within complex biological systems and reveal new details of how those systems are behaving.

Published in Nature Nanotechnology, the findings could enable fluorescent sensors to be used to track specific molecules inside the brain or other tissues deep within the body, according to the project, as well as for medical diagnosis or monitoring drug effects.

"If you have a fluorescent sensor that can probe biochemical information in cell culture, or in thin tissue layers, this technology allows you to translate all of those fluorescent dyes and probes into thick tissue," said Volodymyr Koman from MIT.

The breakthrough, at the MIT lab of Michael Strano, involves modulating the frequency of the fluorescent light emitted by the sensor so that it can be more easily distinguished from the tissue autofluorescence. A technique christened wavelength-induced frequency filtering (WIFF) combines three lasers so as to create an excitation beam with an oscillating wavelength.

"The fluorescence excitation wavelength is modulated across the absorption peak of a nanosensor, allowing the emission signal to be separated from the autofluorescence background, increasing the desired signal relative to noise, and internally referencing it to protect against artifacts," noted the project in its published paper.

The WIFF technique also enhances the signal from a variety of other sensors, including carbon-nanotube-based sensors that Strano's lab has previously developed to detect hydrogen peroxide, riboflavin, and ascorbic acid.

Depths that were not possible before

Using highly scattering phantom tissues, a mouse model and other complex tissue types, the project showed that WIFF improves the nanosensor signal-to-noise ratio across the visible and near-infrared spectra up to 52-fold, according to its Nature Nanotechnology paper.

To model a real-world clinical scenario, the MIT project focused on glioblastoma, an aggressive type of brain cancer. Therapy usually includes the chemotherapy drug temozolomide (TMZ) after surgery, according to MIT, but monitoring whether the drug is working or not can be difficult. Normal fluorescence techniques have trouble detecting a reliable signal from such environments, so WIFF might improve the situation.

"We are working on technology to make small sensors that could be implanted near the tumor itself, which can give an indication of how much drug is arriving at the tumor and whether it’s being metabolized," commented Michael Strano. "You could place a sensor near the tumor and verify from outside the body the efficacy of the drug in the actual tumor environment."

When TMZ enters the body it gets broken down into smaller compounds, including one known as AIC. The team designed a sensor that could detect AIC and showed that they could implant it as deep as 5.5 centimeters within an animal brain and still read the signal from the sensor through the animal's skull.

The next steps will include replacing the three lasers creating the oscillating beam with a tunable laser, a change likely to become more feasible as the price of tunable lasers decreases and the sources become faster.

"The technique works at any wavelength, and it can be used for any fluorescent sensor," said Strano. "Because you have so much more signal now, you can implant a sensor at depths into tissue that were not possible before."