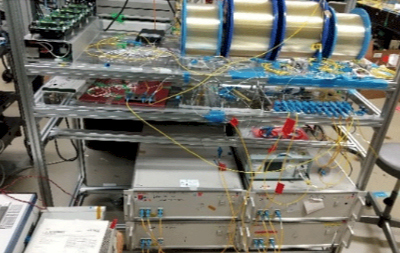 Researchers from the Network Research Institute at Japan’s National Institute of Information and Communications Technology (NICT) have reported the world’s first demonstration of more than 1 petabit per second in a multi-core fiber with a standard diameter of 0.125 mm.

The results of this experiment were accepted as a post deadline paper presentation at the International Conference on Laser and Electro-Optics (CLEO) 2022, earlier this month.

Two kinds of doped fiber amplifiers along with Raman amplification with pumps added in a novel multi-core pump combiner, enabled transmission of 801 wavelength channels over the 20 THz optical bandwidth.

The large number of wavelength channels were transmitted in each core of a four-core MCF that is notable for having the same cladding diameter as a standard optical fiber. Such fibers are compatible with current cabling technologies and do not require the complex signal processing needed for unscrambling signals in multi-mode fibers, meaning conventional transceiver hardware may be used.

Four-core MCFs are thought to be the most likely of the new advanced optical fibers for early commercial adoption. This demonstration shows their information carrying potential and is a significant step toward the realization of backbone communication systems that supports the evolution of Beyond 5G information services. 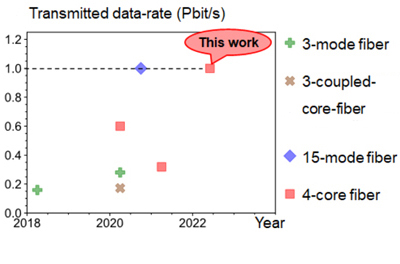 Demand for enhanced data transmission capacity has inspired both investigation of new spectral transmission windows and advanced optical fibers exploiting parallelization in the spatial domain. In recent years, advanced fibers with the same cladding diameter as standard single-mode optical fibers, but able to support multiple propagation paths have been proposed.

However, such fibers require complex MIMO (Multiple-input-multiple-output) digital signal processing to unscramble the signals which are mixed during transmission, and practical deployment is expected to require large-scale development of dedicated integrated circuits.

NICT constructed the latest transmission system using 4-core MCF with standard 0.125 mm cladding diameter, WDM technology and mixed optical amplification systems. The system allowed transmission of 1.02 petabit per second over 51.7 km. Previously, 610 terabit per second was achieved in a similar fiber but only using part of the S-band.

Research by Southampton’s Airguide Photonics program into the development of hollow-core fibers with record-low propagation losses and exceptional power-handling properties has been published in Nature Photonics.

The research focuses on the transmission of kilowatt power laser beams over kilometer-scale fiber lengths, while preserving a practically ideal, single-mode beam quality. This transmission is impossible in conventional optical fibers as the high laser intensity interacts with the glass and quickly compromises the beam integrity, meaning single-mode kilowatt power levels can typically only be transmitted over a few tens of metres in conventional fibers. 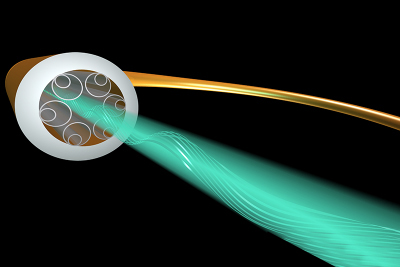 Southampton's Dr Hans Christian Mulvad, who led the high-power transmission experiments, commented, “The enabling technology behind our breakthrough is the development of hollow core fibers with record-low propagation losses. Since the laser beam propagates within a hollow core, instead of a solid glass core as in a conventional fiber, the detrimental non-linear interactions with the glass are virtually eliminated. This allows very high-power levels to be transmitted without any detrimental effect on the beam quality.

“Also, the low loss is essential for an energy efficient transmission, allowing the bulk of the laser source power to be delivered at the fiber output even after a kilometer,” he said.

“Recent breakthroughs have seen the propagation loss reduced to record-low levels, comparable to established fibers at near-infrared telecom wavelengths and even lower in the visible range of the spectrum. It is one of these record-low loss NANFs, operating in the near-infrared, which is employed in this work.”

“This fiber and arrangement enabled the research team to demonstrate transmission of a kilowatt single-mode laser beam over one kilometer, with a total power loss of only 20 per cent. Mulvad added, “We have also performed detailed numerical simulations showing that the fiber may support even higher power levels and longer transmission lengths, underlining the superior performance of NANF over conventional fibers for single-mode power delivery.”