Near-IR DOLPHIN platform could lead to earlier detection of cancers. 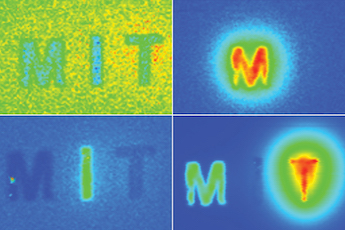 The challenge of spotting biological features, such as early-stage cancers, with fluorescence microscopy in complex tissues remains significant. But a project at MIT could point towards non-invasive real-time tracking of fluorophores in living patients at greater tissue depths than currently possible.

Christened DOLPHIN, for Detection of Optically Luminescent Probes using Hyperspectral and diffuse Imaging in Near-infrared, the imaging platform both excites the fluorescent probe and detects the probe emission in the NIR-II spectral region of 1000 to 1700 nanometers. This band is optimally suited for deep in vivo optical imaging, thanks to a relatively lower degree of tissue absorption, scattering, and autofluorescence.

A bespoke deconvolution algorithm then compensates for the autofluorescence and scattering that persists, without the need for prior knowledge of the optical properties of the tissue of interest.

This combination is said to allow the system to distinguish different NIR-II fluorescent probes from the spectral information available, and find the best spectral band for deep-tissue detection. Post-processing on the diffuse profile for that selected band determines the precise location of the fluorescent probe. The results were published in Scientific Reports.

"We want to be able to find cancer much earlier," said Angela Belcher of MIT. "Our goal is to find tiny tumors, and do so in a noninvasive way."

According to the project's published paper, DOLPHIN combines hyperspectral imaging (HSI) and hyperdiffuse imaging (HDI) modalities, said to be the first implementation of both modes in a trans-illuminated configuration detecting NIR-II fluorescent signals. Previous HSI and HDI platforms have worked in the visible and NIR-I wavelengths, resulting in shallower depths of detection and relying on comparison to reference spectra to identify features of interest, noted the team.

The trans-illumination configuration could prove to be particularly valuable for translation to the diagnosis of human diseases such as breast cancer, or for real-time fluorescence-guided surgery, where the advantages of low tissue autofluorescence and high sensitivity outweigh the potential disadvantage of a more complicated instrumentation setup.

In trails, the system proved able to resolve large one-millimeter fluorescent probes through up to eight centimeters of a breast-mimic optical phantom, and six centimeters of muscle tissue.

Tests using smaller 100-micron probes, closer to the size of the cellular species of interest, found that DOLPHIN could non-invasively track the probe through the gastrointestinal tract of a living mouse, an achievement which is said to be beyond the detection limit of current imaging modalities.

This could point towards clinical use of the technology to see the very small clusters of tumor cells, also around 100 microns in size, which are known to be important in the development sequence termed the angiogenic switch in cancers.

Detection of ovarian cancer could be one particular area of interest, since the disease is usually diagnosed very late due to the small size of the initial tumors. The team is also working on adapting this type of imaging to detect pancreatic cancer, brain cancer, and melanoma.

"Ovarian cancer is a terrible disease, and it gets diagnosed so late because the symptoms are so nondescript,” said Belcher. "We want a way to follow recurrence of the tumors, and eventually a way to find and follow early tumors when they first go down the path to cancer or metastasis. This is one of the first steps along the way in terms of developing this technology."