Market debut of commercialized technology comes through partnership with STMicroelectronics. 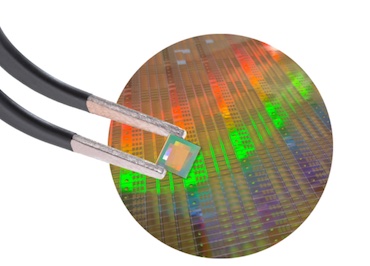 Ready for use: Metalenz optics

A time-of-flight sensor from STMicroelectronics marks the commercial introduction of Metalenz metasurface technology.

The metasurface component within the VL53L8 direct time-of-flight (dToF) sensor is the product of a partnership between STMicroelectronics and Metalenz that was disclosed in June 2021.

This marks the first time metasurface technology is commercially available and being used in consumer devices, according to the companies, and is intended to point towards improvements in performance, power, size, and cost that meta-optics could bring to several applications.

"More than a decade of foundational research has brought us to this point," commented Rob Devlin, co-founder and CEO of Metalenz.

"We have multiple wins that mark the first application of our platform technology and we are now designing entire systems around its unique functionality. Our meta-optics enable exciting new markets and new sensing capabilities in mobile form factors and at a competitive price."

Metalenz was founded in February 2021 as a spin-out from Harvard SEAS, with an exclusive worldwide license to a portfolio of innovations in flat optics developed in the Harvard lab of Federico Capasso. It launched with $10 million in investment from Intel Capital, 3M Ventures and others.

Speaking at the time, Capasso commented that the metalens platform "has the potential to drive a revolution in imaging and sensing, from the ubiquitous cameras in cell phones, cars, and self-driving vehicles to AR/VR, and in the future to widespread use in drones and CubeSats. I am grateful to Harvard OTD for encouraging and supporting, all along, the creation of Metalenz."

Planar optics on a chip

In June 2021, market analysis by Lux Research into the commercial prospects for optical metamaterials concluded that their commercial deployment was imminent, and that a market worth several billion dollars would develop by 2030. Metalenz was specifically identified as one of the companies driving that prospect, along with Canadian firm Meta and gradient index (GRIN) lens developer Vadient Optics.

In January 2022 Metalenz unveiled PolarEyes, a prototype platform employing the company's metasurface technology to reduce the size and complexity of polarized light cameras through "shrinking a polarization sensor by over 5000x." Such polarization cameras could be valuable in several consumer-facing sectors such as facial recognition and autonomous vehicle sensors.

Meanwhile the new dToF sensor is a first step towards broad industrial applications for similar metaoptics breakthroughs, according to vendor STMicroelectronics. Metalenz technology allows the device to incorporate planar optics on a chip, fabricated using standard semiconductor processes in the same foundries that produce microelectronics and CMOS image sensors.