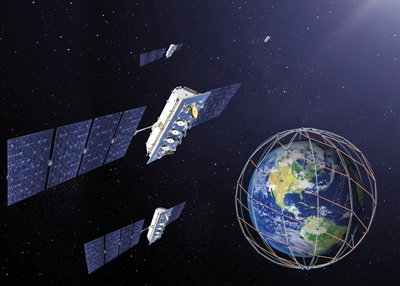 NASA has signed what is being described as an “industry-first” agreement with US-based BridgeSat that it is hoped will result in a commercial laser communication system to support future satellite missions.

BridgeSat says that the reimbursable agreement represents the latest milestone in its effort to deploy a global communication system based around free-space optical links to low-Earth orbit (LEO) satellites – something that it claims will be not just faster, but also much less expensive than traditional radio frequency (RF) connectivity.

In-orbit testing next year
BridgeSat’s engineers are set to collaborate with NASA’s Applied Engineering and Technology Directorate, as well as the Space Communications and Navigation (SCaN) program within the Human Exploration and Operations Mission Directorate.

The Washington, DC, company says the deal will involve NASA helping BridgeSat to refine the design of the system, to meet its interoperability requirements, and achieve compliance with Federal Aviation Administration (FAA) regulations.

“A ground station demo will be complete by late 2018, with in-orbit testing finished by May 2019,” BridgeSat predicted.

Its CEO Barry Matsumori added in a company release: “This industry-first agreement is a strategic win not only for NASA and BridgeSat, but also for the other government agencies and businesses that could benefit from our technology once it’s commercialized.

“Together, we’re meeting the global need for secure, reliable satellite communications for mission-critical and bandwidth-intensive applications.”

Hossin Abdeldayem, a senior technology manager at NASA’s Goddard Space Flight Center, echoed those thoughts, explaining that the out-sourcing deal should mean that NASA is able to deploy the next-generation technology more quickly and at lower cost than if it was to develop the technology in-house.

LeoSat links
Meanwhile LeoSat Enterprises, which is planning to launch a constellation comprising more than 100 laser-linked low-Earth orbit (LEO) satellites, has signed an agreement with Phasor that will enable customers to access the future network with more conventional RF links.

Under the terms of the deal, Phasor is to develop a high-power electronic steerable array (ESA) operating in the microwave (Ka-band) spectrum that will enable LeoSat customers to access the anticipated gigabit-speed, high-security satellite network.

“Phasor’s LEO-capable antenna technology will enable corporations, governments and other high-end users to access a network offering speeds about 1.5 times faster than terrestrial fiber, in combination with high-throughput, ultra-security and very low latency,” stated LeoSat, which like Phasor and BridgeSat is headquartered in DC.

LeoSat is working to launch the network in tandem with Thales Alenia Space, and envisages between 78 and 108 LEO satellites linked to each other optically, but with high-power microwave downlinks to terrestrial stations.

Back in 2016 Thales Alenia Space, which is majority-owned by the France-headquartered defense giant Thales, acquired the optoelectronics business previously owned by Swiss engineering firm RUAG – giving it direct access to the technology needed for inter-satellite terminals. LeoSat says that each satellite “node” will feature four optical links.

Partly aimed at customers in the financial sector, the high-speed network is expected to offer faster speed than even a fiber-optic terrestrial link – with LeoSat touting a latency of just 119 milliseconds for a signal to reach Singapore from London.

Unlike other developers of high-speed LEO networks, LeoSat is not aiming the capability at the wider public, instead choosing to focus on the business-to-business sector.

The company, which is believed to be seeking $100 million in a series A round of venture funding, has scheduled satellite launches starting in 2021, with the first full worldwide service expected to become available a year later.