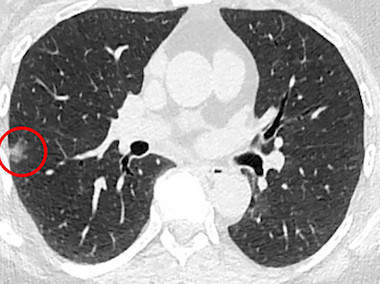 A study from Abramson Cancer Center at the University of Pennsylvania, part of Penn Medicine, has indicated that a modified confocal laser endomicroscopy platform could permit accurate discrimination between tumor and normal pulmonary tissue by non-experts.

As published in Nature Communications, the Center's proof-of-concept study analyzes pulmonary nodules as a test case, but the results may be generalizable to other malignancies, pointing to faster and more straightforward analysis of tissues.

"This research shines a light on the possibility of being able to more accurately identify and diagnose lesions that could be cancerous, even those that are very small and may evade our typical diagnostic capabilities," said Sunil Singhal from the Abramson Cancer Center. "The quest to diagnose lung cancer in earlier stages is a centerpiece of our research, since early detection is so closely connected to chances for successful treatment."

The Cellvizio nCLE platform was developed by Mauna Kea Technologies to facilitate optical biopsy procedures, in which tissue samples can be analyzed without the need for removal and separate microscopic study. A low-power laser illuminates a tissue of interest and transmits light reflected from the tissue via a flexible optical fiber bundle to generate high-resolution images.

More recently, and partly in light of company finances, Mauna Kea has shifted focus onto pulmonology and molecular imaging under a new CEO. In late 2021 it indicated that the total addressable market for interventional pulmonology was worth $1.3 billion annually, with lung nodule biopsies such as those investigated by the new study being specifically mentioned.

Increasing the chances of early identification

The new Abramson procedure combined Cellvizio nCLE with the use of pafolacianine, a NIR fluorescent dye known to target particular malignant cells, integrating the two technologies to achieve real-time detection of cancer at the single cell level during biopsy.

"This method, which we term near-infrared needle-based confocal laser endomicroscopy (NIR-nCLE), combines NIR imaging using pafolacianine with an ultra-thin flexible nCLE system to exploit both the cancer-specificity of the targeted NIR tracer as well as the cellular-level resolution of CLE," commented the project in its published paper.

As proof-of-concept, the study evaluated NIR-nCLE for identification of malignant cells during biopsy of solitary pulmonary nodules (SPNs) from five patients. SPNs are the most common incidental nodule detected annually in the United States, according to the Abramson team.

Results showed that the NIR-CLE technology had the resolution to identify a single cancer cell among normal fibroblast cells when co-cultured at a ratio of 1:1000, and could detect cancer cells in human tumors less than 2 centimeters in diameter. The platform delivered easily interpretable images in real-time, an important consideration if accurate discrimination between tumor and normal tissue are to made by non-expert observers.

"The emerging ability to light up a single cell that may be invisible to the eye provides great opportunity to give patients the best chance at an early diagnosis before cancer spreads," said Gregory Kennedy, a resident in General Surgery at Penn. "This unique approach has the potential to improve the information we get from biopsies and it may increase our chances of identifying cancer early."